This article is using {{Card template}}.
See Help:Style guide/Card for how to edit this kind of article.
Edit this article
Underbelly Angler
51724 • DAL_049
Regular 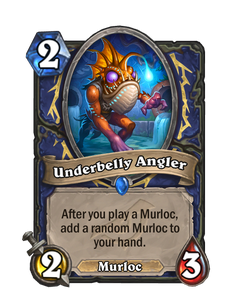 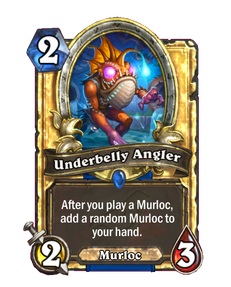 Dimensions: Full • 330 x 410px
After you play a Murloc, add a random Murloc to your hand.
Flavor text 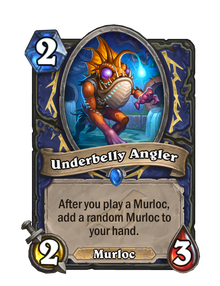 Underbelly Angler is a rare shaman minion card, from the Rise of Shadows set.

An incredibly powerful card for any Murloc deck. Its combination of solid vanilla stats and card generating effect make it a must-have.

Underbelly Angler is a priority kill for your opponent. Try to play it alongside other murlocs for immediate value, and use Coldlight Seer or Feral Spirit to protect it where possible. You can also guard it by giving a token murloc Poisonous with Toxfin.

Underbelly Angler has obvious synergy with Scargil, making your generated murlocs cost 1 mana. If played at 10 mana, this effect will create up to 4 murlocs while also playing 6 minions out. This combo is strong enough to use outside of a murloc deck, simply playing Angler then Scargil to get the generation started.

The Underbelly is the name of the Dalaran sewer system which has its own separate map. Many races, but mostly goblins, dwell in these sewers and they could be viewed as the slum of Dalaran. The central area of the sewers is the Circle of Wills, a large hall in which the arena vendors, some dueling circles, and a small, currently unused cluster of buildings stand. Southwest of here is a section called Cantrips & Crows which contains the inn, the tavern, and the bottom exit pipe of Dalaran. The northeastern corner goes unnamed, and has a few vendors but not much else notable. Finally, further northeast, there is a small chamber in which the rogues of Dalaran operate the Black Market where reagents and rogue supplies can be found, as well as the vicious sewer shark Segacedi.

In Legion, the Underbelly Guard patrols the area, led by the corrupt Guard Captain Raethan.

The Underbelly has been transformed into the Hall of Shadows of the Uncrowned during the Burning Legion's third invasion of Azeroth. The transformation halved the accessible areas and removed access to the inn, bank and tunnel out of Dalaran.