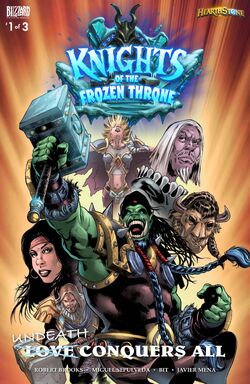 "Have you ever heard the tragic tale of Arthas and Jaina? It’s not a story most tavern folk would tell you. Everyone thinks they know how those two lovers clashed when confronted with the power of the Frozen Throne, but this is what really happened. This is how they truly brought ruin to their world. It’s definitely not embellished at all, and if it is, it’s for the best."[1]

Undeath Conquers All (stylized as Love Undeath Conquers All) is the first issue of a series of official Hearthstone: Knights of the Frozen Throne web comics, as well as the first-ever Hearthstone comic over all. It was released on July 21st, 2017 to celebrate San Diego Comic-Con[2] and focuses on Jaina Proudmoore, Arthas Menethil, Uther Lightbringer and Thrall.

The script was written by Robert Books, while the illustrations were made by Miguel Sepulveda, Bit, and Javier Mena.

The comic upons upon the Hearthstone tavern, in which a Pompous Thespian is entertaining a group of patrons when he overhears a human couple, one of them a pirate (seemingly a Bloodsail Raider), on the other side of the room discussing their upcoming journey to the Frozen Throne in search of the power there. The night elf warns the couple that only horrors await those who seek the throne. In response, the humans ask if the elf has any stories about the location. Though initially reluctant to comply, the thespian is swayed by the offer of gold coins and begins telling the tale of the Scourging of Lordaeron, when the Plague of Undeath laid waste to the human kingdom of Lordaeron and turned its populace into mindless undead, and of how Lady Jaina Proudmoore and Prince Arthas Menethil rushed to face the undead threat. Just as the elf is telling of the death of the necromancer Kel'Thuzad, however, he is interrupted by a patron in a red shirt who points out that the elf's lore is inaccurate, since he is portraying Kel'Thuzad as a skeleton. The female pirate complains that the attendees already know the story, but the thespian replies that they shouldn't spoil it for those unfamiliar with the story and continues with his tale, describing the dilemma faced by Arthas, Jaina and Uther Lightbringer at the city of Stratholme, which had been reached by the Plague but whose inhabitants had not yet turned into undead.

When the pirate complains again that they already know that tale, the thespian changes the story by stating that Jaina decided to aid Arthas in purging the city, and that they decided to stay together on their path of damnation. The elf continues by telling of how the Frozen Throne whispered to Jaina and promised her the power to battle evil, and of how Arthas and Jaina knelt before the Frozen Throne together to offer fealty to the dark force that had drawn them together again. The thespian skips ahead to Jaina and Arthas, now a pair of death knights, waging war against the living, causing the world to cry out for heroes to stand against them. The elf reveals that Thrall answered the elements' call and began the long journey to Icecrown, while across the sea, Uther the Lightbringer tracked down his former pupil. Arthas and Jaina easily defeated Uther together, but the paladin's story did not end there, for the power of the Frozen Throne reached out once more. The thespian asks the listeners if Uther would slip away into the peace of death or if he would accept a new power to achieve vengeance.

The pirate replies that she doesn't pay the elf for a story of peace. The thespian replies "Vengeance it is" and relates how the Frozen Throne transformed its new servant while Jaina and Arthas continued to destroy in its name. However, the Frozen Throne called for them to return to Northrend, telling the two death knights that it would choose only one of them to inherit its power. When they arrived, they discovered that the Throne had a surprise in store in the form of Uther, now a death knight, who leapt forward to attack them. However, he was suddenly interrupted by the appearance of Thrall, who urged Arthas and Jaina to return to being the heroes they once were and told them to surrender. The shaman was silenced by an icy blast, and Uther tried to continue exacting his vengeance, but was suddenly interrupted yet again by Thrall, who was now also a death knight. The night elf's story finishes with a massive battle between the undead Jaina, Uther and Thrall, and he again urges the pirate to not seek the Throne for her family's benefit, as it will only bring them to ruin. However, the pirate replies by inquiring who won the fight. The thespian begins to say that that is not the point of the story, but after being offered more gold he concedes that Jaina won.