This article is using {{Card template}}.
See Help:Style guide/Card for how to edit this kind of article.
Edit this article
Ultrasaur
41315 • UNG_806
Regular 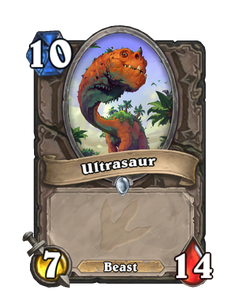 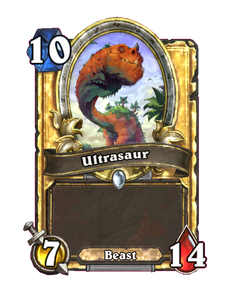 Evolved the really long neck to spy on its neighbors. 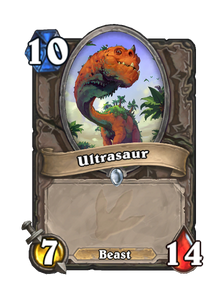 Ultrasaur is a common neutral minion card, from the Journey to Un'Goro set.

This card is similar to Faceless Behemoth, albeit with better stats. Much like Faceless, it has no immediate impact on the board outside of raw stats, making it very weak to removal. If you do manage to avoid removal, this card is very strong, being able to kill nearly any minion and surviving, though it may not be worth the massive mana cost. However if you combine it with cards such as Faceless Shambler, Sunfury Protector or Defender of Argus it can be an absolute nightmare for opponents. This card can also be brought to your hand by Ancient Harbinger.