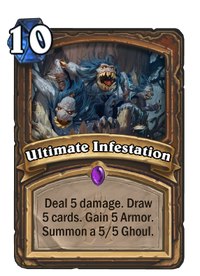 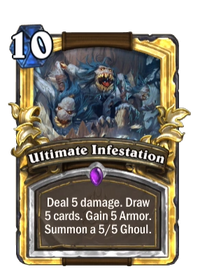 Ghouls in the pipe, five by five.

Ultimate Infestation is an epic druid spell card, from the Knights of the Frozen Throne set.

Ultimate Infestation can be obtained through Knights of the Frozen Throne card packs, or through crafting. 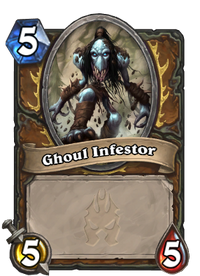 If the target of Ultimate Infestation is golden, the Ghoul Infestor token will be golden as well.

The massive amount of card draw complements the Jungle Giants quest well, allowing you to potentially draw many cost-reduced minions, while also helping towards the quest in case it isn't completed yet.