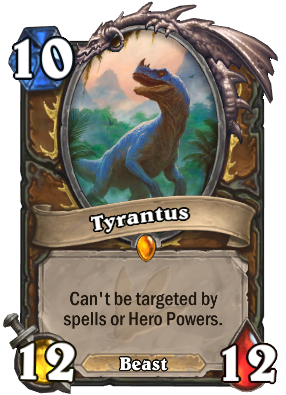 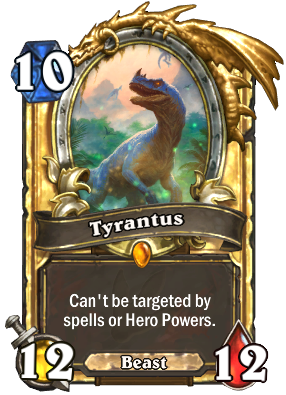 Millennia of evolutionary pressures turned his species into the Faerie Dragons we know today.

Tyrantus is a legendary druid minion card, from the Journey to Un'Goro set.

Tyrantus can be obtained through Journey to Un'Goro card packs, or through crafting.

While Tyrantus is a huge minion that rivals Deathwing in size and is harder to remove than Deathwing, the fact it costs 10 mana and has no immediate effect on the board makes it difficult to play without already having board advantage. But once the Jungle Giants quest is completed, a 0-cost Tyrantus is an extremely powerful minion to draw. Since it lacks a Battlecry, it is also one of the best minions Giant Anaconda or Oondasta can pull out.

Tyrantus is a devilsaur that wanders around Eco-Dome Farfield in Netherstorm. Another devilsaur with the same name appears as an elite mob during the Un'Goro Madness micro-holiday in Un'Goro Crater.

Although unconfirmed, multiple rumours suggest this was supposed to be for mage instead in beta, with a different name and artwork. It was supposedly deemed "too game-swinging" at the time.