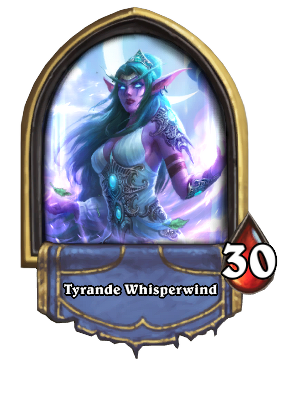 For other appearances of Tyrande, see Tyrande Whisperwind (disambiguation).
"Not everyone sleeps during the night. Under the light of the moon, I truly shine, for the goddess Elune grants me strength and her power shields me from harm. I am High Priestess Tyrande Whisperwind. Those who dare harm my people will not live to see the sunrise!"[1]

Tyrande Whisperwind is an alternate hero for the

High Priestess Tyrande Whisperwind has been a fierce protector of her people for millennia. Her wisdom is legend—she has seen kingdoms rise and fall, and she has faced every threat to Azeroth for thousands of years. She is the chosen of the goddess Elune, and under her leadership the Night Elves have survived and prevailed throughout history. Whether defeating demonic incursions, managing difficult relationships, or providing wise council to Azeroth’s greatest leaders, Tyrande always knows the right play.[2]

Tyrande Whisperwind (pronounced teh-rahn-dah) is the chosen high priestess of the goddess Elune, the former general of the night elf sentinels and the current head of the Sisterhood of Elune. Together with her lifelong mate, the archdruid Malfurion Stormrage, she has represented the highest leadership of the night elves since the fall of Queen Azshara and the Highborne caste ten thousand years ago. In World of Warcraft, she is found inside the Temple of the Moon within the Kaldorei's capital city of Darnassus.

In the years prior to the Burning Legion's first invasion, Tyrande was the object of both Malfurion and his brother Illidan's affections. In the end, the priestess chose the druid over the sorcerer. After playing a pivotal role in the War of the Ancients, Tyrande was promoted to General of the Sentinels and would protect Kalimdor for over 10,000 years while her lover and the druids slept in the Emerald Dream. Tyrande and Malfurion then led the night elves in the Third War, defeating the Burning Legion as they had done in ages past at the Battle of Mount Hyjal. She subsequently stepped down as general, handing the reigns to her adoptive daughter Shandris Feathermoon, to devote herself fully as leader of her people.

After Malfurion had become trapped within the Emerald Dream for a prolonged period of time, Tyrande journeyed into the dream to rescue him. In the wake of the Shattering, Tyrande and Malfurion were wed and now lead their people as one. Together they supported the worgen of Gilneas in their return into the Alliance. Tyrande also restored complete night elf control over Ashenvale as a result of the Alliance-Horde War.

Tyrande Whisperwind can be claimed for free by visiting the Free section in the in-game Shop, starting on 10AM PT, December 10, 2019.

Obtaining Tyrande grants a special card back (see below).

Tyrande was available exclusively through subscribing to Twitch Prime, which is included as part of Amazon Prime. Twitch Prime members were able to obtain a code to unlock Tyrande for their account. The promotion lasted from around September 30 until November 5.

As of September 2016, Twitch Prime was only available for customers in the United States, Canada, UK, Germany, France, Italy, Spain, Belgium and Austria. The developers are still discussing alternative means for players in other countries to obtain Tyrande in the future.[3] However, it was reported that Twitch Prime's availability is determined solely by the address provided by the customer, allowing players from other regions to temporarily alter their details and thus obtain the code for Tyrande.

Tyrande was available to both new and existing members. Amazon Prime members were able to opt-in to Twitch Prime at no additional cost by linking their Twitch.tv account to their Amazon Prime account. While Amazon Prime normally costs a monthly fee, new customers were able to use the 30-day free trial to receive rewards including Tyrande for free, provided they canceled their membership before the end of the trial period.

Tyrande was available to players with their Battle.net country of residence set to certain specific countries in the SEA region, through a limited-time special promotion.

To obtain Tyrande, players had to purchase a 40 card pack bundle from the in-game Shop or the official Battle.net shop between January 25 and February 10, 2017, while qualifying for all the below criteria:

Players who met these criteria were awarded the Tyrande hero on February 28, 2017.

When viewed in the Collection, Tyrande Whisperwind has the following flavor text:

Unlike some people, this leader didn't fall asleep on the job. We're looking at you, Malfurion.
Obtained from a special promotion.

Tyrande notably adds several new types of emotes, including several for world events familiar from World of Warcraft but not yet seen in Hearthstone.

The following emotes were added with the introduction of the hero, but removed with the subsequent Patch 6.2.0.15181. All appear to correspond to upcoming events or features, and are not listed for other heroes, with the exception of "good game".