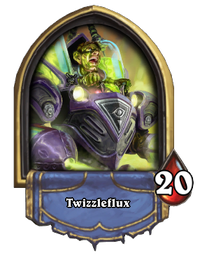 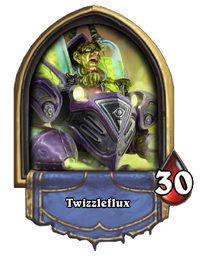 Twizzleflux is spreading the very curse that maligned him.

Twizzleflux is a boss that can be encountered in Chapter 1 of Tombs of Terror.

These decks correspond only to level 4. If this boss is encountered on level 3, his deck will be missing 5 random cards from listed below.

Twizzleflux
I have a way with curses. Wanna see?!
vs. Sir Finley

A talking murloc? Were you... cursed?

I'll show you my own kinda curse.

Twizzleflux
I can't hear you over all... the curse spreading I'm doing, hahaha!

Twizzleflux
Get out there and infect the world!
I hope you DO catch the curse from this one!
You might be feeling a bit sick…

Twizzleflux
Sometimes you infect people for fun, sometimes it's for gold!
Ya like the mech's new paint job? E.V.I.L. picked the colors.
You just don't find evil horrible curses in ancient tombs like you used to.

The new boss is letting me try one of his toys!

Twizzleflux
Cast a Plague
Plague spreading! I knew you had good tastes!

Oh? We having a big mech battle?!

Thermaplugg! I'm a HUGE fan of your work!

Twizzleflux
Time to find out if this curse works on you!

Mekgineer Twizzleflux the Insane is an elite level 84 leper gnome in steam armor located at Starwatch Tower on top a cliff east of the Lost City of the Tol'vir. He holds the access codes to the Expedition's Crawler Vehicle. A small group of Expedition Members can be found gathered in front of him. Twizzleflux will turn them into Cursed Expedition Members when approached.

Twizzleflux was in charge of a large expedition into Uldum. When he and his men dug too deep into a cursed tomb, they were afflicted by a terrible curse that has robbed them of their sanity and taken control of their minds. Somehow able to contain the curse within his suit of armor, he is now able to curse more gnomes that arrive as requested.

In Hearthstone lore, Twizzleflux has apparently joined the League of E.V.I.L..