Hearthstone Wiki
Register
Don't have an account?
Sign In
Advertisement
in: All cards, Wild format cards, Undead art,
and 3 more

This article is using {{Card template}}.
See Help:Style guide/Card for how to edit this kind of article.
Edit this article
Twisting Nether
859 • EX1_312
Regular 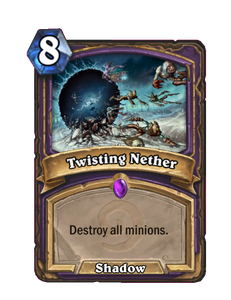 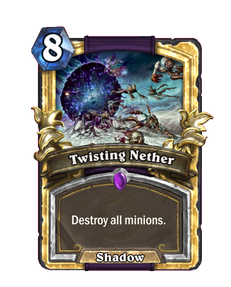 The Twisting Nether is a formless place of magic and illusion and destroyed minions. 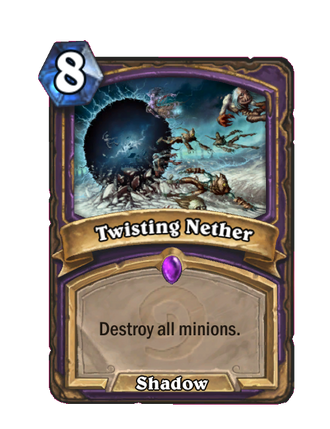 Twisting Nether is an epic warlock spell card, inducted into the Legacy set, formerly from the Classic set. 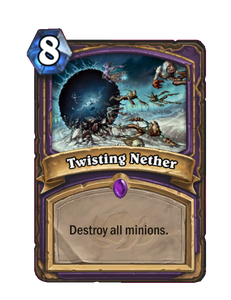 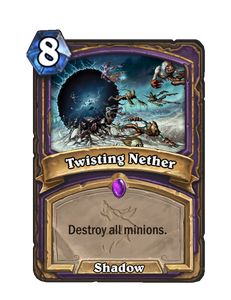 Twisting Nether are obtained for raising warlock to level 8.

Twisting Nether (Core) is uncraftable and cannot be crafted or disenchanted.

A very situational card because of its high mana cost and the fact that it destroys all minions on the board, including your own. Ideally played when destroying your opponent's minions outweighs the loss of your own. Losses can also be offset by having Deathrattle minions on your side of the battlefield, such as

Enhanced Dreadlord, allowing you to recover quickly from the wipe, or even intentionally activate your own

Also an excellent card to play when your opponent has a small or empty hand, immediately before playing

Lord Jaraxxus. This can serve very well for buying the warlock time to build their new offensive, strongly increasing their chances of victory.

Most control warlock decks can justify running one or two copies of twisting nether in their deck, as it is an obvious fit, although many decks also forgo it in favor of newer and more powerful, or more synergy-focused options. Handlock, for example, uses

Shadowflame more often, while Cubelock would rather run

Twisting nether should be played while keeping a good game sense in mind, such as keeping track of approximately how many valuable minions your opponent should have in their hand and deck. If you feel like your opponent might have many valuable minions left, try to refrain from playing twisting nether if you can afford it. It goes without saying that, if you are low on health and can not afford to take lose more HP, then using twisting nether to clear the board is a must do.

The Twisting Nether is a dimension separate from, but intertwined with, parts of the primary material dimension. It is not to be confused with the Great Dark, though there seems to be some overlap.

It is an ethereal dimension of chaotic magics that connected the myriad worlds of the universe, and home to an infinite number of malefic, demonic beings who sought only to destroy life and devour the energies of the living universe.