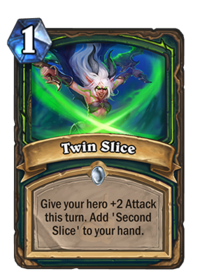 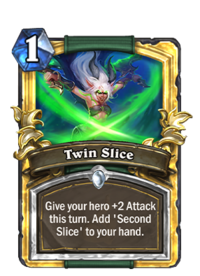 Give your hero +2 Attack this turn. Add 'Second Slice' to your hand.

The slice so nice, it'll cut you twice.

Two copies of regular Twin Slice are obtained after unlocking Demon Hunter class. They cannot be crafted or disenchanted. 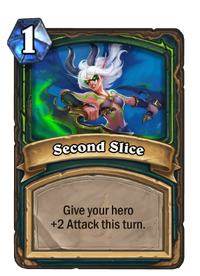 Despite having been nerfed, this card remains a very strong Demon Hunter staple - it is equivalent to an Eviscerate split in two halves, and is still a reliable method to either find burst damage, take down large minions, or simply improve the effects of certain weapons like Aldrachi Warblades and Flamereaper. Lifesteal, notably, benefits in great ways from Attack buffs, and Attack-synergy cards like Blade Dance can gain a lot of value. The Second Slice can be saved for later or played simultaneously for another attack bonus.

A secondary benefit to this card is the hand manipulation it enables, as various Demon Hunter effects reward playing cards from specific positions. Its cheap cost enables Outcast cards to be used more easily, and Altruis the Outcast benefits greatly from this card - the Second Slice is always received on the far-right, guaranteeing a trigger when it is played.

In Wild, the change from zero to one mana is only arguably a nerf, since Odd Demon Hunter can use this card to great effect with an already powerful improved Hero Power.

Previously, Twin Slice and Second Slice costed 0 mana, helping Demon Hunters make great use of the damage boost and have better hero attack synergies, thus increasing the value of the card. Twin Slice could be used to activate cards like Satyr Overseer and Battlefiend for 0 mana, twice.

The card's free cost made hand manipulation easier, allowing the player to play Outcast cards more freely. It also had incredible synergy with Altruis the Outcast - since the Second Slice was always the leftmost card after being played, it guaranteed at least one trigger of his effect. With Twin Slice also cast from the side, this was 2 damage to all enemies for no extra mana.

As a 0-mana spell that generated a 0-mana spell, Twin Slice had incredible synergy with Kael'thas Sunstrider, immediately letting the player cast a strong spell such as Inner Demon.