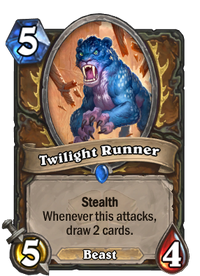 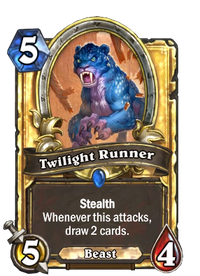 Stealth Whenever this attacks, draw 2 cards.

Every morning you find two dead cards at your doorstep.

Twilight Runner is a rare druid minion card, from the Scholomance Academy set.

A fantastic card for Beast Druid and Ramp Druid alike. With stealth, Twilight Runner almost always guarantees the card draw, making it an improved but slower Big Ol' Whelp. Five attack makes Twilight Runner a good card for trading into an opponent's midrange threats, with the draws helping you come ahead in the trade. It's not likely to survive for very long once stealth is broken, so you should make the most of the attack you get.

Twilight Runner is naturally a fantastic card to pull from Guardian Animals, giving you the option to swing immediately for cards or simply cheating the minion into play to attack and draw cards on your next turn. Twilight Runner can also be resurrected by Witching Hour and N'Zoth, God of the Deep.

If you're against a slower druid deck and playing a slower deck yourself, it might be a good idea to avoid playing minions coming into their 8-mana turn (6 or even 5 mana can be dangerous with Lightning Bloom and Innervate). This prevents Twilight Runner from getting immediate value if summoned by Guardian Animals. You can counteract Twilight Runner's card draw by saving board clears like Soul Mirror, Flamestrike, Chaos Nova, and Earthquake for the turn after Twilight Runner is played.