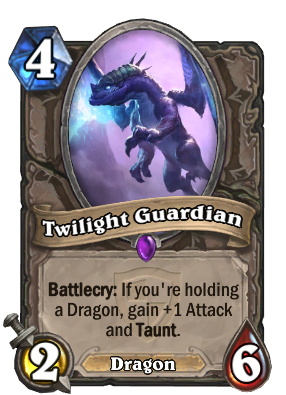 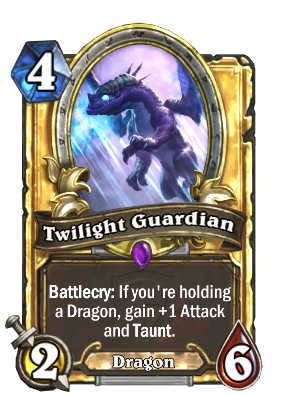 Battlecry: If you're holding a Dragon, gain +1 Attack and Taunt.
Flavor text

A result of magical experiments carried out by the Black Dragonflight, it's not his fault that he's a vicious killer.

Twilight Guardian is an epic neutral minion card, from the Grand Tournament set.

Twilight Guardian can be obtained through The Grand Tournament card packs, or through crafting.

Twilight Guardian is a 4-Drop Dragon for Dragon decks, which helps bridge the tempo gap between Blackwing Technician and Blackwing Corruptor. If you can activate its Battlecry you get a Fen Creeper for 1 less mana, which makes it an excellent inclusion in any Dragon deck where you need extra defense against aggressive starts.

The twilight dragonflight is a dragonflight created by the results of magical experiments carried out by Sintharia upon dragon eggs. Using ancient dragon artifacts and the powers of the nether dragons, Sintharia has created a new breed of dragons that feed vampirically on all forms of mystical energy. The first encounter of these dragons with the outside world was by Krasus, Kalec, and the draenei priestess Iridi. Iridi thought of their appearance not as shadow, but more akin to the day turning to night, like twilight as experienced on Azeroth. She thus dubbed them twilight dragons.