This article is using {{Card template}}.
See Help:Style guide/Card for how to edit this kind of article.
Edit this article
Twilight Flamecaller
38409 • OG_083
Regular 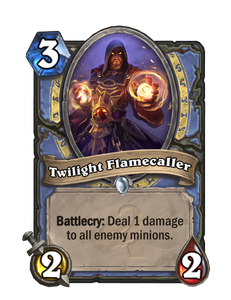 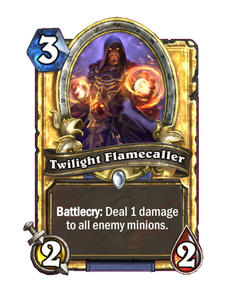 Make sure you summon a Twilight Marshmallowcaller too! Mmmm Mmm Mmm!! 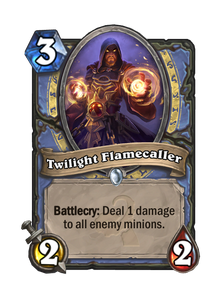 Twilight Flamecaller is a common mage minion card, from the Whispers of the Old Gods set.

This is a good option for countering minion-heavy decks like Zoolock, the value of the Flamecaller's Battlecry increasing with each enemy minion on the board. Usually a better card than Arcane Explosion, as for 1 more mana it also summons a 2/2 minion.

In combination with Brann Bronzebeard, it is also a great counter versus Steward of Darkshire, removing the Divine Shields and dealing 1 damage to the one-health minions, effectively killing them.

Summon
Can I light your fire?

Twilight Flamecallers (also spelled Twilight Flame Callers) are servants of the Twilight's Hammer cult. They were part of the Old Gods' forces that attacked Azeroth following the Cataclysm, and are seen in World of Warcraft assaulting Mount Hyjal as well as in the Blackrock Caverns.