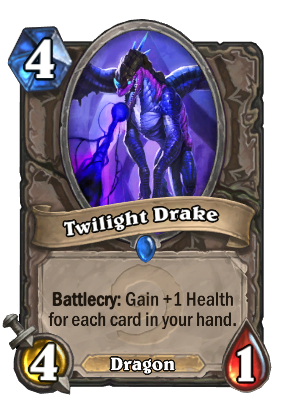 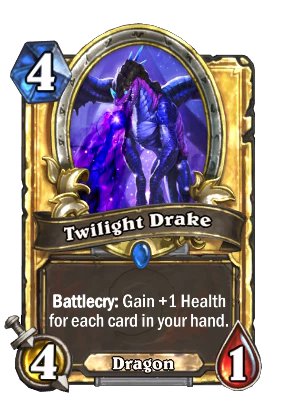 Battlecry: Gain +1 Health for each card in your hand.
Flavor text

Twilight Drake is a rare neutral minion card, inducted into the Legacy set, formerly from the Classic set. 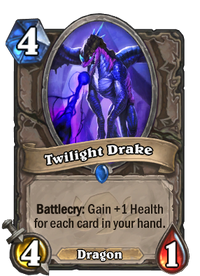 Twilight Drake can be obtained through Classic card packs, or through crafting.

Twilight Drake is best played with as many cards in hand as possible. Its possible starting Health values range from 1 to 10 (11 if you manage to draw a card before the actual minion is played).[1]

Twilight Drake naturally gravitates towards control decks with strong card draw capabilities and/or few low-cost cards. It is currently most commonly seen in Handlock decks, warlock control decks which use Life Tap to rapidly accumulate a large hand, perfect for playing a near full-potential Drake early in the game.

Ideally, Twilight Drake is played from a full hand before playing any other cards. Control decks may aim to focus on building their hand during early rounds in order to maximize the effectiveness of their Twilight Drakes.

Consider running one of these cards if facing a lot of Priests as they lack efficient counters to a 4 attack Dragon minion. This can also be considered with Azure Drake in Wild.

Twilight Drakes are any one of a small number of dragons which comprise the Twilight Dragonflight, first seen in the World of Warcraft expansion Wrath of the Lich King.

The twilight dragonflight is a dragonflight created by the results of magical experiments carried out by Sintharia upon dragon eggs. Using ancient dragon artifacts and the powers of the nether dragons, Sintharia has created a new breed of dragons that feed vampirically on all forms of mystical energy. The first encounter of these dragons with the outside world was by Krasus, Kalec, and the draenei priestess Iridi. Iridi thought of their appearance not as shadow, but more akin to the day turning to night, like twilight as experienced on Azeroth. She thus dubbed them twilight dragons.

Midnight Drake is the corrupted version of this minion.