This article is using {{Card template}}.
See Help:Style guide/Card for how to edit this kind of article.
Edit this article
Twilight's Call
45353 • LOOT_187
Regular 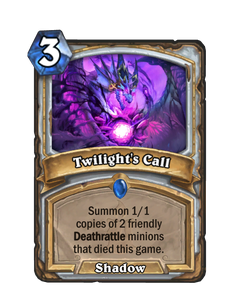 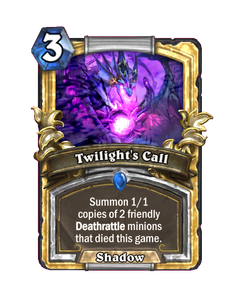 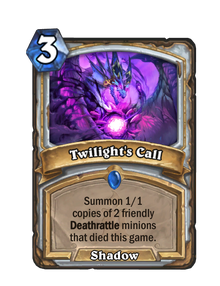 Twilight's Call is a rare priest spell card, from the Kobolds and Catacombs set.

The copies summoned by this Spell will count towards Awaken the Makers, and can help to complete the Quest quickly using cheap Deathrattle minions such as Crystalline Oracle. Alternatively, it also provides Summoner Priest decks with another tool to resurrect extra copies of Obsidian Statue. Unfortunately, there are not enough low-cost cards with powerful Deathrattles to make this card worth playing most of the time.

Note that this card will not count minions which were given a Deathrattle buff through other means. For example, a minion with Elixir of Hope will not be viable for resurrection, unless it died while the controlling player had a full hand.

This card works well with Weasel Tunneler, as it lets you put two more useless cards into your opponent's deck.