Twig of the World Tree 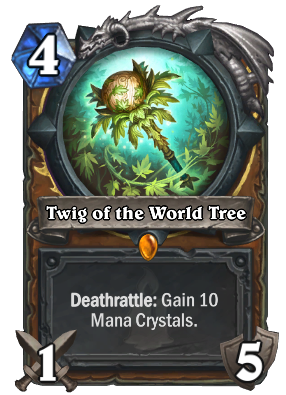 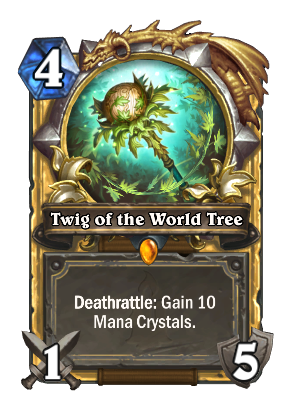 For druids who want to branch out.

Twig of the World Tree is a legendary druid weapon card, from the Kobolds & Catacombs set.

Twig of the World Tree can be obtained by:

This weapon has an extremely slow effect, but pays off for combos built around it. It gives 10 filled Mana Crystals when destroyed, meaning it gives you 10 more mana on the turn it's broken. This extra mana can be used to either build a bigger board or set up a one-turn-kill combo. One OTK is to summon Ixlid, Fungal Lord then copy it with Faceless Manipulator, break the Twig, summon Malygos to create 4 of them, then use two Moonfires to deal 42 damage.

Its extremely high durability and relatively high mana cost means in most cases it can't be used to ramp. The fastest you can destroy the Twig is on turn 8 if you attack with it on every turn. However, Wild has ways to destroy the weapon much earlier by replacing it. Blingtron 3000 easily destroy it as early as the next turn, and Medivh, the Guardian can do this as well, although he costs 8 Mana, which is not too much faster. However, using the Sphere of Sapience can break this weapon on the same turn you equip it (with help from The Coin or Innervate).

While it's impractical to use for ramp, the Twig deters weapon destroying cards like Harrison Jones from being played, since it will bring you up to 10 Mana instantly. It does not work after reaching max mana and will deny you the bonus mana if destroyed on the opponent's turn.

The Twig of the World Tree is a rare two-handed mace from classic World of Warcraft that can drop from level 58-63 monsters across the world. The name references the World Trees, enormous trees created by night elf druids; specifically, it presumably refers to either Nordrassil or Teldrassil, as those were the only two World Trees that had been introduced in Warcraft lore by the time of classic World of Warcraft.

Nordrassil, meaning "Crown of the Heavens" in Darnassian, is the original World Tree of the night elves, located on the new Well of Eternity, atop Mount Hyjal. It granted the elves immortality, and allowed the druids to enter the Emerald Dream, until the Battle of Mount Hyjal, which removed those blessings. Nordrassil's roots grow deep into the earth, spreading life-giving energy across the world. This is similar to what the first Well of Eternity did before it was destroyed.

Teldrassil (pronounced TELL-druh-sill) is an island extended from the second World Tree situated off Kalimdor's northwestern coast. It is the new home of the reclusive night elves and a stunning testament to the power of their magic and connection with nature. The behemoth of a tree now dwarfs even Nordrassil, and is large enough that a decent amount of land has emerged atop its gargantuan limbs. Trees, flora, and fauna are now verdantly spreading across the magical tree.

Teldrassil holds the entire night elf homeland and its capital, Darnassus, in its boughs. This land shares the tree's name and is covered in twilit forest. The new tree was not blessed by the Aspects at its birth, unlike its predecessor, which left it vulnerable to corruption. However, just before the Cataclysm, it did receive the blessings of Alexstrasza and Ysera.