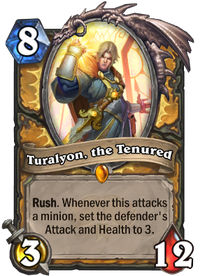 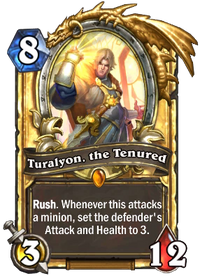 Rush. Whenever this attacks a minion, set the defender's Attack and Health to 3.
Flavor text

"Let evil flee before righteousness; let the innocent live in peace. Let the day come when none need fear. For that day, I give my life gladly."

For the Duels hero, see Turalyon, the Tenured (Duels hero).

Turalyon, the Tenured is a legendary paladin minion card, from the Scholomance Academy set.

Turalyon, the Tenured can be obtained through Scholomance Academy card packs, through crafting, or as an Arena reward.

Turalyon is effectively a hard removal on a 3/9 body, except against Divine Shield minions. Turalyon can neutralize big threats easily, which makes him strong against decks that run big minions. A downside is that he trades less efficiently with minions with less than 3 Attack, making him take more damage if he does. His mediocre 3 Attack also makes him susceptible to poor trades on the opponent's turn. Turalyon is specifically strong against decks that want to play one big minion a turn to control the board, but in any case he is one of the Paladin's few sources of on-demand single-target removal.

Turalyon works well with Duel!, where he beats any minion that gets summoned for the opponent.

In World of Warcraft, High Exarch Turalyon is one of the first five paladins of the Knights of the Silver Hand along with Uther the Lightbringer, Saidan Dathrohan, Tirion Fordring, and Gavinrad the Dire.

This card depicts a version of Turalyon as a professor at Scholomance Academy, which is unique to Hearthstone.

Serving the Alliance army with distinction during and immediately after the Second War, Turalyon was second in command to Lord Anduin Lothar, the Supreme Allied Commander. During the siege of Blackrock Spire, Lothar was struck down in combat against Orgrim Doomhammer. It was General Turalyon that picked up Lothar's battle standard and broken sword, and rallied the army of the Alliance to victory over the Horde, capturing Orgrim and driving the orcs back to the Dark Portal. As the Lion's lieutenant, Turalyon was named Lothar's successor as Supreme Commander by the monarchs of the Alliance.

After the war ended, Turalyon led the Sons of Lothar to Draenor. There they achieved a series of military victories against the Horde and successfully destroyed the Dark Portal's stone frame, severing the link between the two worlds. The victory, however, was short-lived. As the Sons of Lothar clashed with the remnants of the Horde's forces, Ner'zhul had unleashed a powerful spell that tore open countless portals, ripping the world apart. After fleeing through a nearby rift, Turalyon and his lover, Alleria Windrunner, became separated from their companions. Their whereabouts were unknown for decades.

Following their disappearance, Turalyon and Alleria encountered the prime naaru Xe'ra and the Army of the Light. Separated from physical reality and the flow of time, the pair joined the Lightforged as they waged war against the Burning Legion across the Twisting Nether in a struggle that spanned a millennium. During the final war against the Legion, Turalyon and Alleria finally reunited with their comrades when the Armies of Legionfall united with the Army of Light to assault the Legion homeworld, Argus. Turalyon has lived this long because Xe'ra blessed him and, in her words, he "has crossed the boundaries of mortality. He has been found worthy to become an eternal protector of creation."