This article is using {{Card template}}.
See Help:Style guide/Card for how to edit this kind of article.
Edit this article
Tundra Rhino
699 • DS1_178
Regular 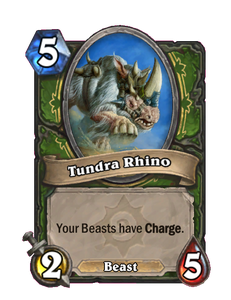 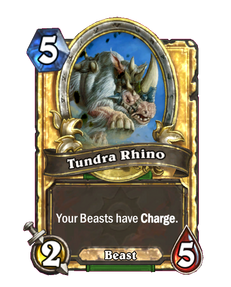 Tundra rhinos are often mistaken for kodos. Or am I mistaken? 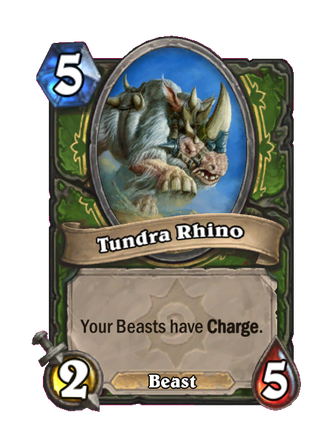 Tundra Rhino is a hunter minion card, inducted into the Legacy set, formerly from the Basic set. 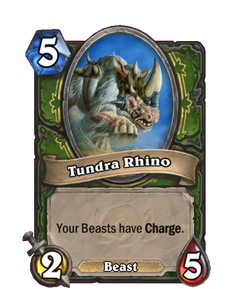 Regular and golden Tundra Rhino are uncraftable and cannot be crafted or disenchanted.

Use Tundra Rhino to deal quick damage to your opponent's hero or minions. Granting Charge to all your Beasts is a great way to bypass the exhaustion after a minion is summoned, allowing it to immediately jump into battle and deal damage. Most effective in combination with Beasts that summon other Beasts as Deathrattle, such as

Kindly Grandmother. Play it with

Scavenging Hyena to gain more advantage from trading your Beasts. Also very powerful in conjunction with

Call of the Wild.

Note that Tundra Rhino's ongoing effect only grants Charge while the Rhino is alive; if it dies, all affected minions will immediately lose the Charge buff. It is therefore advisable to attack with Tundra Rhino last, in case of the death or removal of the Tundra Rhino through damage or triggers such as

When playing against a Tundra Rhino, it's most advisable to remove it as soon as possible, to prevent more powerful and expensive Beasts from gaining Charge.