This article is using {{Card template}}.
See Help:Style guide/Card for how to edit this kind of article.
Edit this article
Truesilver Champion
847 • CS2_097
Regular 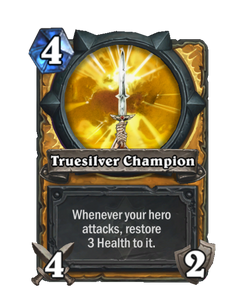 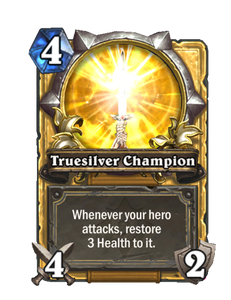 It Slices, it Dices. You can cut a tin can with it. (But you wouldn't want to.) 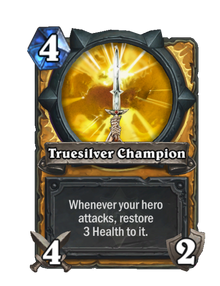 Truesilver Champion is a paladin weapon card, inducted into the Legacy set, formerly from the Basic set. 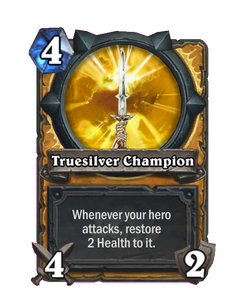 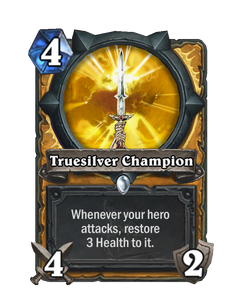 Regular and golden Truesilver Champion are uncraftable and cannot be crafted or disenchanted.

Two copies of regular Truesilver Champion are obtained for raising paladin to level 1.

Truesilver Champion (Core) is uncraftable and cannot be crafted or disenchanted.

As well as being collected in decks, this card can also be generated by the following cards. 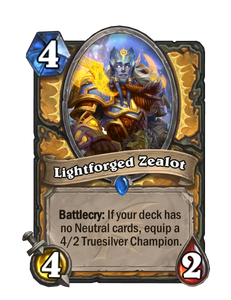 Truesilver Champion is a 4 cost weapon capable of 4 Healing points and 8 Damage points, making it an almost mandatory card for every Paladin Deck. The best use is when your Hero has at least 28 HP.

Furnacefire Colossus can become a 10/8 6 cost if at least one Truesilver is consumed.

You can create an almost infinite source of Truesilver with Hoard Pillager and Rummaging Kobold. While in board, Grave Shambler can become a serious threat.

The Truesilver Champion exists in World of Warcraft as a two-handed sword that will sometimes put up an absorption shield when the wielder is hit. The shield will absorb 175 points of damage before it disappears.

The Truesilver Champion is crafted by Blacksmiths, though the plans can no longer be learned. A skill level of 260 was required when it was available.