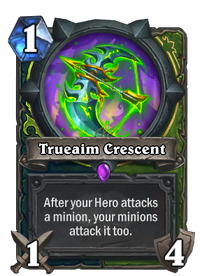 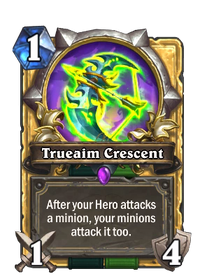 After your Hero attacks a minion, your minions attack it too.
Flavor text

You could have just pointed.

Trueaim Crescent gives the user incredible board control for minion combat. It allows you to effectively give minions you summoned this turn Rush and minions already in play Windfury. This can be useful for pressuring the opponent's face while still destroying a priority minion, or breaking through a Taunt then clearing several smaller minions behind it. Trueaim Crescent has obvious synergy with Ace Hunter Kreen, granting Immune to your whole board and giving you a massive edge in board control matchups.

Trueaim Crescent is also a fantastic Deathrattle activator, particularly for cards like Nerubian Egg and Bloated Python that want their Deathrattles activated quickly.