This article is using {{Card template}}.
See Help:Style guide/Card for how to edit this kind of article.
Edit this article
Trogg Beastrager
40684 • CFM_338
Regular 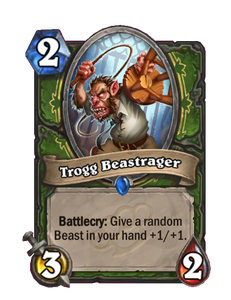 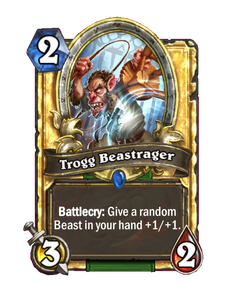 Still angry that the Gadgetzan Rager Club wouldn't accept him as a member. 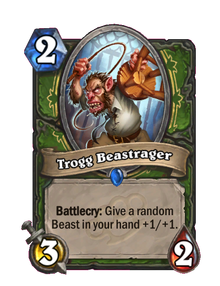 Trogg Beastrager is a rare hunter minion card, from the Mean Streets of Gadgetzan set.

The Battlecry of this card predestines it for a place in decks with multiple beast cards.

Ideally you want to play this card on turn 2, while holding at least one other beast in hand. However, the stats of this card are good enough to justify playing it even when the Battlecry cannot activate.

"It’s not just hardware neither; we also got access to some pretty scary beasts from da Arena!"[1]

This trogg appears to be playing the role of animal handler, using the traditional tools of a circus lion tamer: a stool or chair in one hand, and a whip in the other. With his obvious expertise in handling animals, the Trogg Beastrager is shown hard at work in the Gadgetzan Arena. He appears to be in the service of the Grimy Goons, either supplying or training beasts for the gang.