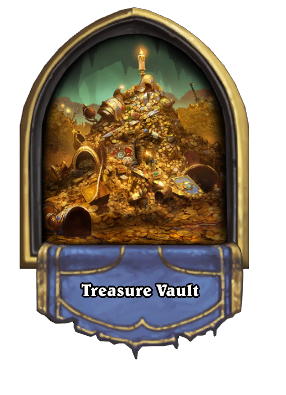 Grab all you can, as fast as you can!
External links

Treasure Vault is a boss that can be encountered during the Dungeon Run. 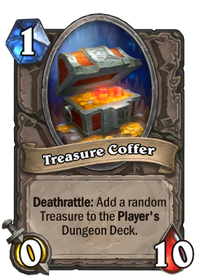 This boss has no deck.

The Treasure Vault has no cards or health, and starts the battle with seven Treasure Coffers. These are 0/10 chests that put a random playable treasure into your Dungeon Run deck on death. However, you are on a turn limit. The moment the Treasure Vault reaches 5 mana, it will activate its Hero Power, causing the level to end in the player's victory.

Since you literally cannot lose this level without conceding, the objective is to try and get as many treasures as possible within this time limit. Mulligan for an aggressive curve to try and get as much damage on the chests as possible. The Treasure Vorpal Dagger is quite useful within this particular encounter, as you can easily destroy four chests at once. If you managed to pick up a Confuse, Void Ripper, Doomsayer (in Mages Starting Deck) or Shadow Word: Horror during the run, a single use of it will break all the chests at once, letting you leave with a large amount of loot.

The Treasure Vault is unique to Hearthstone. In World of Warcraft, a bank is the closest thing to it.