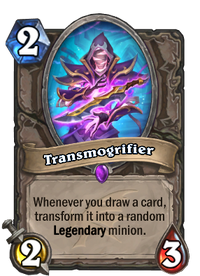 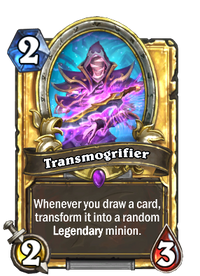 Whenever you draw a card, transform it into a random Legendary minion.

All it takes is some imagination and a cardboard box.

Transmogrifier is an epic neutral minion card, from the Descent of Dragons set.

Transmogrifier can be obtained through Descent of Dragons card packs, or through crafting.

Since Transmogrifier's ability only activates when you draw a card, it's recommended you use it with card draw like Plot Twist or Book of Specters to stack up legendary minions in your hand. Her effect can be used to potentially purge cards like Bombs and Albatrosses from your deck, replacing them with typically higher-value cards.

Summon
You lack style. Luckily, you have me.
Attack
Huh. Tacky.