This article is using {{Card template}}.
See Help:Style guide/Card for how to edit this kind of article.
Edit this article
Transfer Student
58947 • SCH_199
Regular 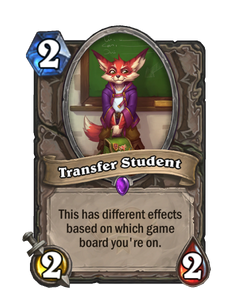 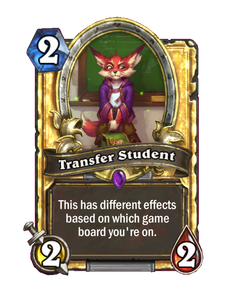 Click here for full resolution image
This has different effects based on which game board you're on.
Flavor text

Oh, the places you'll go!
There is so much to fight!
There are boards to be explored.
There are dreams to take flight.

Transfer Student is an epic neutral minion card, from the Scholomance Academy set.

Two copies of regular Transfer Student are obtained by owning a Scholomance Academy pack and going to Open Packs menu.

Two copies of Golden Transfer Student are obtained by playing one game of Book of Heroes: Rexxar, The Dalaran Heist, Tombs of Terror, Galakrond's Awakening, and Trial by Felfire, and playing at least one match in both Battlegrounds and Arena.[1]

Transfer Student is uncraftable and cannot be crafted or disenchanted.

Two copies of regular Transfer Student were obtained by logging into Hearthstone from July 14 to October 20, 2020.

At the start of game, Transfer Student's effect is automatically replaced by one of the following ones, depending on the board.

Year of the Gryphon[]

Year of the Phoenix[]

Year of the Dragon[]

Year of the Raven[]

Year of the Mammoth[]

Year of the Kraken[]

Transfer Student's effect depends on the game's board, which is randomized at the start of the game and cannot be controlled by players. It can range from having a few keywords attached to completely changing the game, but it will always stay with a 2-mana 2/2 body without tribe synergy. It is very unreliable for Quests or synergy decks, as being able to contribute with your deck depends on having the right board. Due to each variant of Transfer Student being different for each battlefield, they have completely different uses. Some variants resemble existing minions, while others can be powercreeps or more reliable versions, and some are scaled-down equivalents of effects previously unique to Legendary minions. However, if your enemy understands Transfer Student's variants, they may be able to predict what it will be used for.

Transfer Student works best in a Highlander deck, which can use a strong but otherwise unsynergetic early drop.