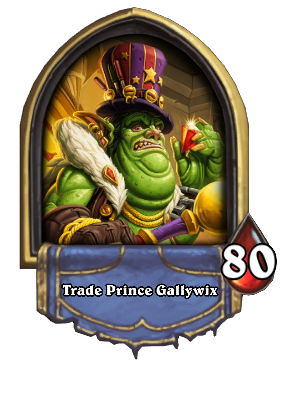 The goblin Prince has rigged the market. Against you.

Trade Prince Gallywix is the final boss that can be encountered in Chapter 1 of The Dalaran Heist adventure.

To beat Trade Prince Gallywix you have to play conservatively. Don't give him any cards that will end your run.

The ideal thing is to open your turn with an elusive minion immune to hero powers, such as the Faerie Dragon.

Summoning Ysera who in turn has a chance to give you Laughing Sisters is ideal. The 9-mana cost of Ysera can be made available earlier via dice.

The next best thing is to open with a weak or disadvantageous card.

You can also destroy Cache of Cash using your hero power to get two copies of The Coin to use at the start of your turn: he will copy those.

Sometimes, you can even turn it against him by gaining coins from Booty Bay Bookie or Hoarding Dragon.

Since The Coin is seen as a separate card, you can fill his hand up or play powerful cards to jump ahead.

Use of hero powers (like Rakanishu (hero) using his fireball) is ideal since he can't copy those, and should be emphasized when there's limited mana.

Another way to get ahead is to make use of card-multiplying effects. Medivh, the Guardian gives Atiesh which for example, will give free summoned minions when you play spells, making it more worthwhile.

It can be worth holding out until later when you have more mana so you can play many cards all at once, rather than playing one per turn and giving boss copies of each, unless you really want that coin.

Xavius is helpful since Gallywix's Coins will trigger his Satyr summoning.

If he plays a Fel Reaver it is ideal not to kill it, since it causes him to lose 3 cards from his deck every time you play one. This will let him quickly run out and start taking damage when you play his coins back against him.

Heistbaron Togwaggle
Bah, goblin King. All hat. No candle.
Evil goblin gets money from capiter-lism, instead of honest thievery.
Is biggest, mostest important goblin! You can tell by belly.
Oh! It is being goblin King! You distract, I take wallet.

Trade Prince Gallywix
You steal from Dalaran, you steal from ME.
I've met a lot of snakes in my day, but this one takes the cake! (vs. Vessina)
Oooh sorry. Let me step aside so you CAN STEAL FROM ME. (vs. Mr. Chu)

Captain Eudora
Quiet I've got a robbery to commit.
Trade Prince Gallywix
Couldn't they have hired a REAL pirate for this job?

Trade Prince Gallywix
Time is money. So you're wasting my money. And I don't like that.

Trade Prince Gallywix
These mages SAID it would be impossible to crack this vault.
But what do I see here? A whole crew of crooks standing in front of me!
I don't usually like to get my hands dirty but, I gotta protect my investments!

Buy yourself something nice with that.
Greed. Is good.
I'VE got the best deals, anywhere.
I'll buy it nice and CHEAP.
Oh this was worth it. So worth it.
Yeah, yeah I'll take one of those.

I'd buy that from you, but my hands are full over here.
Oh you think you're so clever, eh? I didn't even want it.
Okay wise guy. That'll end up biting you where the sun don't shine.

I turned a coin into an empire. Yet you waste yours on CARDS.
That's an even trade.

This has been the worst deal in the history of Azeroth.

I don't want to say you're making a mistake here but…
You're gonna sell that to me? For a coin? Nice.

Trade Prince Gallywix
Do you have any idea how much I've... "Invested" in this place?
I've dealt with crooks before, you're no worse.
Look, I got a business to run. Hurry things up.
They don't call me the Trade Prince for nothing here, capiche?

I hope it was worth it for you. Not really.
Really, I gotta thank you for this one.

See? You got something out of this deal.
You're welcome.

Are you some kind of kleptomaniacal lowlife?

HEY HEY! Get your filthy hands out of my POCKETS!

My my my, what a handsome portrayal of gluttony.

Trade Prince Gallywix
My bank is saved! Oh yeah, and the city.