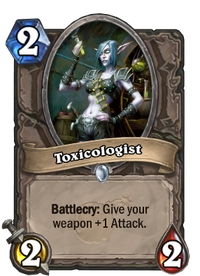 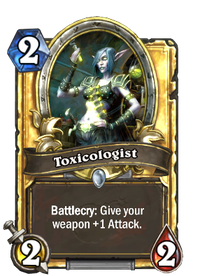 Battlecry: Give your weapon +1 Attack.

Double-majoring in culinary sciences was definitely a mistake.

Toxicologist is a common neutral minion card, from The Boomsday Project set. 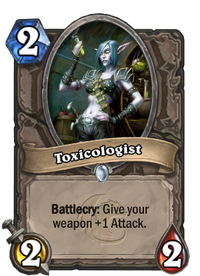 Toxicologist can be obtained through The Boomsday Project card packs, or through crafting.

Two copies of regular Toxicologist (Core) are obtained for raising sum of all your class levels to 1.

Two copies of golden Toxicologist (Core) are obtained for winning 500 games across all classes.

Toxicologist (Core) is uncraftable and cannot be crafted or disenchanted.

Toxicologist is a decent early-game pick for weapon classes, bundling a buff with a small body. It has good synergy with Light's Justice and Kingsbane, since it can be played on curve with these weapons. Additionally, this minion can be used by Mage to give attack to Aluneth, allowing you to more easily destroy the weapon once your deck is empty.

Toxicogist may be preferable to Naga Corsair due to its lower cost, although it is greatly outclassed by Goblin Auto-Barber in Rogue.

In Standard, this could be used to buff weapons with effects like Warglaives of Azzinoth or Sword of the Fallen, either for tempo or for utility.