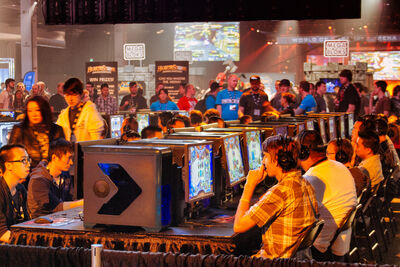 Match formats are formats which determine how games are played between two players for a given head-to-head match.

Conquest is the main match format used in official Hearthstone tournaments. The first player to win with all of their decks is the victor.

Last Hero Standing is the second main match format used in official tournaments. The first player to knock out all of their opponent's decks is the victor.

Shield-Phase Conquest is a match format used in tournaments, identical to Conquest but with a Shield Phase in which players protect one of their decks from being banned.[3]

Specialist is a match format used in tournaments that implements a form of sideboards for a single class deck.

The downside to Single Elimination is that players are eliminated very quickly, and those who lost early may feel less involved in the rest of the tournament. Luck can also play a role in determining unfavorable matches between players of differing skill levels at the start of the tournament.

Round Robin is a non-eliminating tournament format in which players play against every other player for the same number of matches. After all matches are played, the winner is the player with the best win-loss record. This format is great for a small number of players, since it allows everyone to participate, and even if a player loses a match, they can still continue to play.

The downside of Round Robin is that there are more numbers to keep track of for large groups of people, and it can be time-consuming. Round Robins can also be less exciting since there is no "grand final" match.

Swiss is a non-eliminating tournament format in which players are paired with opponents using a set of rules designed to ensure that each competitor plays opponents with similar running scores, but not the same opponent more than once. The winner is the player with the highest aggregate points accumulated.

Swiss is similar to Round Robin but features less rounds. For a large number of entrants, Swiss is generally preferred when a Round Robin format is too time-consuming and infeasible.

Before the start of matches, if specified in the tournament rules, the highest-seeded player can receive an 'advantage' going into the Dual Tournament bracket:

The entry-level tier of competition via the online Battlefy platform where players compete for card pack prizes and the chance to advance to a Masters Tour event.

Annual live and online events hosted in North America, Asia, and Europe where Masters Qualifiers winners and other invitees compete for massive prize money and the chance to become a Hearthstone Grandmaster. In 2020, an enormous prize pool of $3 million was up for grabs over all Masters Tour events.

The highest level of tournament play where 48 Grandmasters compete for ultimate prize money and the glory of becoming Hearthstone World Champion. Every year over the course of two Grandmaster seasons, a colossal prize pool of $1 million is up for grabs. At the end of the year, eight successful players will compete in the final Hearthstone World Championship for a share of a gigantic prize pool of $500,000.

This three-tiered tournament scene replaced the Hearthstone Championship Tour in 2019 as the official tournament structure after the conclusion of the 2018/2019 Hearthstone World Championship.[1] The reason was to simplify the convolutions of the previous tournament system, the HCT, and bring about new fresh changes to tournament organization.

Masters Qualifiers is the entry-level tier of competition, open to all who want to become a Hearthstone esports player. Each week during the Masters Qualifiers season, 30 tournaments are run online through Battlefy, with players having the ability to choose any time they want to participate. Players are able to compete in any region, as long as they possess a collection for that region.

The majority of players win card packs as prizes for participating in the tournament. The ultimate winners upon certain conditions will be eligible to receive an invite to an upcoming Masters Tour event where they will have the chance to face off against name-brand pros and fellow Masters Qualifiers winners.[9]

The Masters Tours make up the second level of competitive play and consist of live and online events hosted in North America, Asia, and Europe. These events are invitation-only tournaments where around 300 competitors including Masters Qualifiers winners and seasoned players in Hearthstone battle it out for prize money and recognition in the Hearthstone esports community.

Participating players are able to take home a share of an annual prize pool of $3,000,000. Players who finish Masters Tour events with the most accumulation of prize money have the additional opportunity to be inducted into Hearthstone Grandmasters, the pinnacle of Hearthstone competitive play.[10]

Hearthstone Grandmasters is the official highest level of tournament play in Hearthstone in which 48 of the world's top players compete in two grueling seasons spanning 8 weeks each. The 48 Grandmasters that compete come from three regions, 16 each from the Americas, Europe, and Asia-Pacific regions.

Grandmasters compete for a share of roughly $500,000 in prize money each season. The winners of each season then become eligible to advance to the Hearthstone World Championship in which they compete for a final share of $500,000 in prize money. The winner of the Championship finale is then crowned with the prestigious title of Hearthstone World Champion.

In 2019, the initial set of 48 Grandmasters was chosen based on lifetime earnings, competitive points earned, and other criteria such as contributions to the Hearthstone community.[11] Player relegation officially began at the end of 2019 Grandmasters Season 2, in which players relegated were replaced with new players who earned the most prize money from all three 2019 Masters Tour events.[12]

With this new top-tier competitive scene, Blizzard entertains players and fans alike on Youtube.com/HearthstoneEsports with many interesting, shocking, and eye-bulging plays from players every Friday, Saturday, and Sunday from 2am to 8pm PDT.

In October 2016, a new international tournament was announced to be hosted, titled the Hearthstone Global Games.[13] It is an official Blizzard tournament in which teams from selected nations compete against each other. Specially selected players from around the world are placed onto the roster for their region's team.

In August 2015, a new collegiate tournament was announced to be hosted,[14] and currently it is titled the Hearthstone® Collegiate National Championship.[15] It is a team event tournament where three-player teams from across the United States and Canada work together to achieve victory and win scholarship money. The top team from each of four regions will move on to compete for ultimate victory at a live finals event.

Fireside Gatherings are real-world gatherings of people to play Hearthstone in public gathering spots.[16] They are intended to be an opportunity for Hearthstone players to meet, mingle, and form real-life friendships, as well as enjoy playing the game face-to-face with opponents in either casual play or in tournament mode format. Fireside Gatherings are meant to take place in public hangouts such as coffee shops, book stores, game stores, dorms, college meeting rooms, recreation centers, and hotel ballrooms.[5] These events can range in sizes from 5-10 people convening in small groups, to 100+ people in large groups.[17]

From 2014 to 2019, the Hearthstone Championship Tour, or HCT, was the main road traveled for players trying to become a Hearthstone World Champion. It was the official tournament system run by Blizzard during those years, before it was discontinued and replaced by the more simplified Hearthstone Masters system in 2019.

Hearthstone Majors and Cups are, respectively, major and minor tournaments which offer Hearthstone Competitive Points as rewards to players who perform well in these tournaments, so that they may advance and compete in the Season Playoffs for the Hearthstone World Championship Tour.

"Blizzard-sanctioned events fall into two point-granting categories: online events that are submitted and approved are considered Cups; events with a larger prize pool are Majors. Cup events on the Hearthstone Championship Tour are the most numerous and offer the greatest number of chances for the greatest number of players to join the HCT tournament system. You can earn points from only one Cup event per month and your best Cup result for the month will be the only result used to grant you HC points. Majors come with higher stakes, bigger prize pools, and can take place at some of the biggest events in esports."[18]