This article is using {{Card template}}.
See Help:Style guide/Card for how to edit this kind of article.
Edit this article
Tournament Medic
2575 • AT_091
Regular 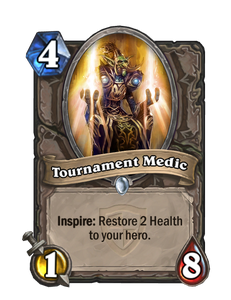 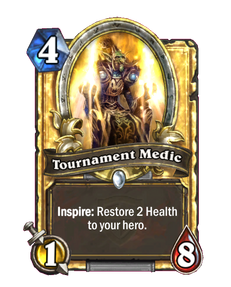 The medic tournament is less entertaining than the Grand Tournament. 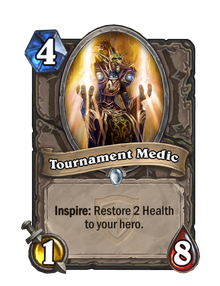 Tournament Medic is a common neutral minion card, from the Grand Tournament set.

This card fits best in decks that intend for the game to be long and drawn out.

While its 1/8 stats make it very poor at trading, your opponent still has to deal 8 whole damage to it in order to kill it. It can be thought of similar to Doomsayer in that it can demand removal and tank damage that would otherwise be headed for your face (or your more important minions), even if its effect never gets to go off. Tournament Medic's high health makes it a great target for the Divine Spirit and Inner Fire combo. If you are a Priest, your opponent may go even further out of their way to kill this minion just because they are afraid of this combo, even if you don't actually have it. This minion also works well with other buffs such as Blessing of Kings.