Hearthstone Wiki
Register
Don't have an account?
Sign In
Advertisement
in: Cards, Card data, All cards,
and 10 more 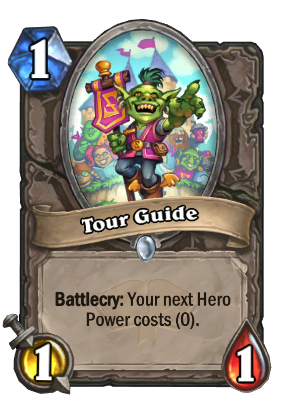 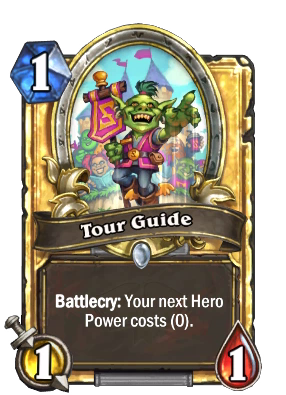 "Here is the original blueprint for the Academy grounds! Don't mind those so-called dark chambers… They'll be at the end of the tour."

Tour Guide is a common neutral minion card, from the Scholomance Academy set.

Tour Guide can be obtained through Scholomance Academy card packs, through crafting, or as an Arena reward.

Tour Guide is an excellent value play for decks that have some form of dependence on their Hero Powers, such as Face Hunter with Toxic Reinforcements and Totem Shaman. It not only acts like (usually) a 1-mana discount for your Hero Power on top of a 1/1, you can also save the mana discount for later to combo it with other cards in the following turn. It's much more value efficient than Waterboy and Fencing Coach, and powerful in Odd decks. Combine this card's effect with the Heart of Vir'naal and you can get to use Battlecry minions that can easily win the game that normally can't work with the Heart like C'Thun, the Shattered and Shudderwock.