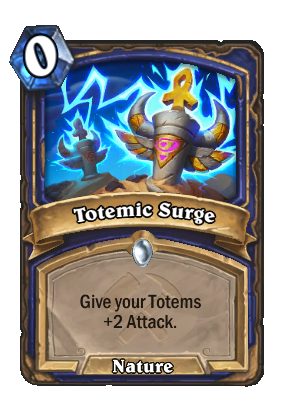 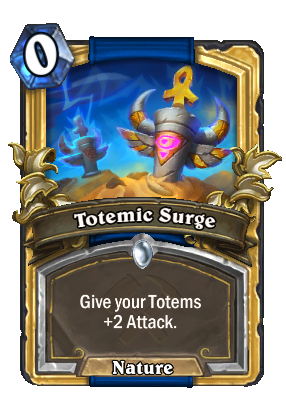 Give your Totems +2 Attack.
Flavor text

It's not really advanced shamanic magic, you just draw nasty eyebrows on them.

Totemic Surge is a common shaman spell card, from the Saviors of Uldum set.

Totemic Surge can be obtained through Saviors of Uldum card packs, or through crafting.

Despite its similarity with Totemic Might, +2 Attack to multiple minions is much more significant than +2 Health, especially considering it's a 0-cost card; comparable buffs like Bloodlust and Vessina cost significantly higher and aren't permanent. However, it comes with the restriction of targeting totems only, limiting its use to totem-based decks.

Totemic Surge is at its strongest when the opponent doesn't expect it coming and leave a totem or two alive on your side. As a free card, it lets you tempo it out with Totem cards like Mana Tide Totem or Nightmare Amalgam to give the card a bigger impact. The totems can also be copied with Splitting Axe and Totemic Reflection to further amplify its value. Wild has cards to make summoning totems for a relatively low cost significantly easier, such as Wicked Witchdoctor and Genn Greymane.