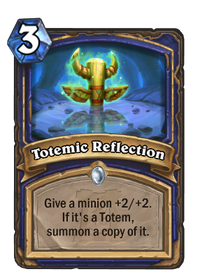 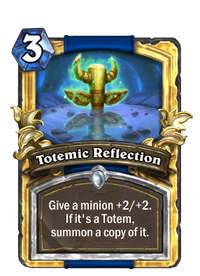 "Upon reflection, I have decided that your board needs more ME."

Totemic Reflection is a common shaman spell card, from the Ashes of Outland set.

Totemic Reflection can be obtained through Ashes of Outland card packs, through crafting, or as an Arena reward.

Totemic Reflection gives an enormous amount of value when used on a totem, making it one of the cheapest minion-copying card in the game on top of giving a healthy amount of stats, which also gets doubled. If it copies a Mana Tide Totem or EVIL Totem, it also loads up your hand with cards to keep some momentum even if your opponent can destroy the totems.

This card on top of Totemic Surge and Totemic Might lets you create very powerful totems very early, and it follows up on curve with Splitting Axe, filling your board with a bunch of buffed up totems.

You can also use this on Totem Golem since it is a totem. Not only it has a great stats for its costs but also being able to make a second Totem Golem with its buffed stats forming two 5/6s Totems.