This article is using {{Card template}}.
See Help:Style guide/Card for how to edit this kind of article.
Edit this article
Totemic Might
830 • EX1_244
Regular 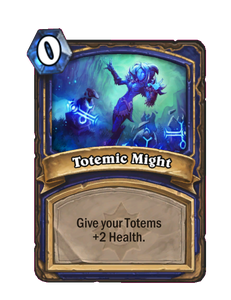 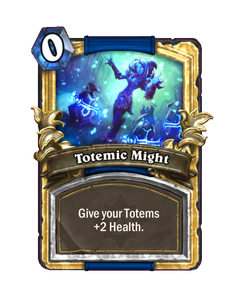 Totem-stomping is no longer recommended. 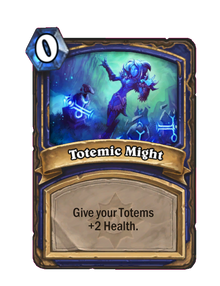 Totemic Might is a shaman spell card, inducted into the Legacy set, formerly from the Basic set. 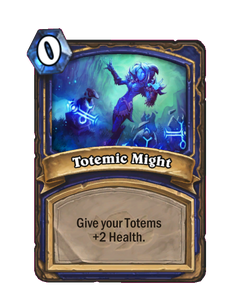 Regular and golden Totemic Might are uncraftable and cannot be crafted or disenchanted.

This card can be used to protect your totems by giving them more Health, allowing them to survive longer to make use of their effects. Since most totems have 0 Attack, this effect is more useful on other non-basic totems like Mana Tide Totem and Totem Golem.

Totemic Might can be combined with Totemic Surge to give all your totems +2/+2 for 0 mana, creating a huge early game tempo swing if you use it on 2 or more totems. They can be combined with Splitting Axe or Totemic Reflection to double your buff mileage, which also helps with keeping your totems alive to play these swing cards on curve. Totemic Might is also an even-cost card, which allows it to be used in Genn Greymane decks, where the reduced Hero Power cost greatly helps in keeping multiple totems up at a time.

As a standalone card, Totemic Might is nearly useless due to its very limited targets and non-significant effect. Thus, this card has extremely narrow usage in Totem Shaman decks.