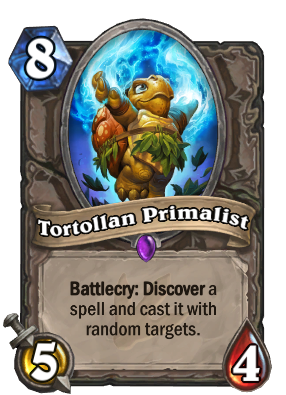 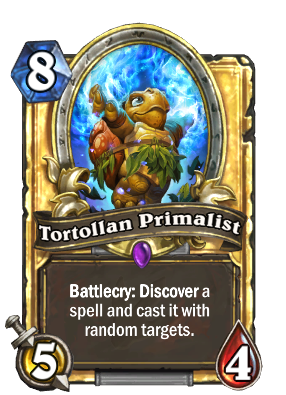 Battlecry: Discover a spell and cast it with random targets.
Flavor text

I see pizza in my future.

Tortollan Primalist is an epic neutral minion card, from the Journey to Un'Goro set.

Tortollan Primalist can be obtained through Journey to Un'Goro card packs, or through crafting.

This minion has identical stats and a similar effect to Servant of Yogg-Saron, but costs an additional 3 mana. It has three upsides over Servant: firstly, the Discover will allow the player to avoid spells that always have bad outcomes or ones with poor chances of working. Secondly, the card can cast any collectible spell available to your class, not just ones that cost 5 or less. Finally, this minion is neutral rather than Mage specific.

This card does have a massive downside over Servant, that being its cost. It is severely understatted and will usually use up most of your mana for the turn it's played. Despite the Discover effect helping reduce the randomness, this card is still at the mercy of RNG. Even if you select a powerful spell, it has a chance of hitting the wrong target. It may also simply show you no cards that help you in your current situation, making it a waste of 8 mana.