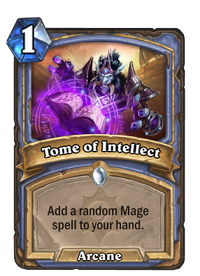 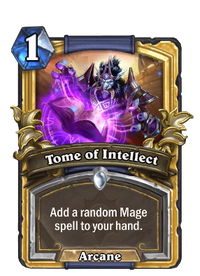 Add a random Mage spell to your hand.
Flavor text

Just a compilation of napkins of intellect.

Tome of Intellect is a common mage spell card, inducted into the Legacy set, formerly from the Classic set.

Tome of Intellect can be obtained through crafting only.

A tiny version of Cabalist's Tome that simply replaces itself with another Mage spell. The range of effects for Mage spells is fairly large, making this card unpredictable for both players. Given the unreliability of this spell, it's often better to just put the spells you want into your deck. Tome of Intellect is however a great way for new players to experience Mage spells they may not own.

Tome of Intellect can be useful for completing Open the Waygate. Shifting Scroll is comparable to this card, since it lacks the 1 mana upfront cost but cannot be "locked into" something else. Primordial Glyph, Babbling Book, and Shimmering Tempest are generally stronger alternatives to this card.