This article is using {{Card template}}.
See Help:Style guide/Card for how to edit this kind of article.
Edit this article
Tol'vir Stoneshaper
41241 • UNG_070
Regular 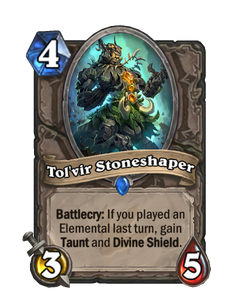 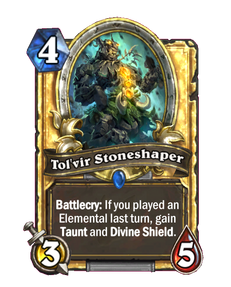 He spends a lot of time keeping himself in stoneshape. 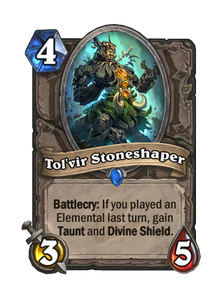 Tol'vir Stoneshaper is a rare neutral minion card, from the Journey to Un'Goro set.

This minion is a very powerful defensive minion for elemental decks, granting far more value than Psych-o-Tron or Sunwalker. As a downside however, this minion is not an elemental, so when played on curve it leaves turn 5 without an elemental follow-up. It may be better to save it on turn 5 and play it with a cheap elemental like Flame Elemental to keep elemental synergies next turn. Follow it after Tar Creeper to develop a sturdy early-game wall. The card is also strong when used in combination with 3 drop elementals, such as felsteel executioner in demon hunter

Attack
Quake before the earth!

In the story of Journey to Un'Goro, a group of tol'vir wandered from Uldum into the neighboring region of Un'Goro Crater and made a home for themselves there.[1]