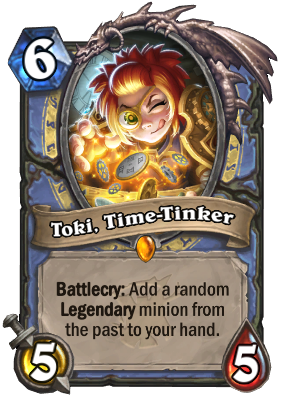 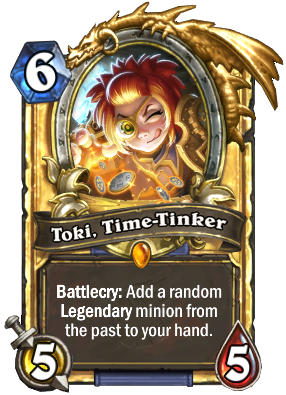 Battlecry: Add a random Legendary minion from the past to your hand.
Flavor text

Just a twist to the left, one quarter turn to the right and … oops! Well, we didn’t need that timeline anyway.

Toki, Time-Tinker is a legendary mage minion card, from the The Witchwood set.

Toki, Time-Tinker can be obtained through The Witchwood card packs, or through crafting.

The below table lists all collectible legendary minions exclusive to Wild format, representing the range of possible minions that Toki can add to your hand.

Toki is best used in an endurance-style Mage deck looking for a bit of extra value. Toki's random draws can be highly beneficial, since your opponent will have a hard time playing around so many possible Legendaries. That said, the extreme variance weakens this card quite a bit, since there are many, many weak pulls. Generally, Elise the Trailblazer or Sindragosa will provide more consistent value than Toki.

In Wild mode, this card loses almost all of its potential value, since the surprise factor is lost.

Toki is unique to Hearthstone. She is a time traveller who is friends with the bronze dragon Chronormu and tinkers with bending time and alternate timelines. Her Battlecry effect represents creating a portal to the past and calling for help from legendary minions whose time in the sun has passed.[1]

Don’t be deceived by this fresh-faced, young gnome—Toki is a powerful mage who possesses an uncanny talent for time magic. Unusually, she often channels her power through arcane devices of her own invention, rather than casting spells. Her unflappable determination and willingness to take inconceivable risks make her a dangerously effective hunter. Somehow, she is always exactly where she needs to be, at the exact moment she needs to be there, and chance events tend to go her way far more often than they should. Unfortunately, her extreme talent is paired with a blithe disregard for the consequences that her magics might have for the fabric of time. She displays a similar cheerful apathy toward both Gilneas and the curse—she appears solely interested in stopping Hagatha from affecting an event in her own future.

It is certain that Toki will play a key role in undoing Hagatha’s work in the Witchwood—no matter how many tries it takes!

This scarred and grizzled arch-mage is fiendishly powerful, with an incredible and innate control over time magic. There have been frequent sightings of her in the city of late, though only for moments at a time. Startled witnesses have noted that her form flickers in and out of existence— it’s as if she can’t maintain her presence in this timeline for long, and they describe her as seeming haunted, crazed, or obsessed. Bizarrely, she has been showing citizens pictures of herself and asking them if they have “seen this gnome.” She displays a grim disregard for both Gilneas and the curse—she appears solely interested in stopping someone in this city from affecting an event in her own future.

It seems clear that she absolutely will not stop until she finds her quarry. Given her evident power, it’s certain to be a bad day for that unfortunate soul when the time comes.

(We received these conflicting reports about Toki at precisely the same time. Both were delivered by the same agent, who disavowed any knowledge of writing either report.)[2]