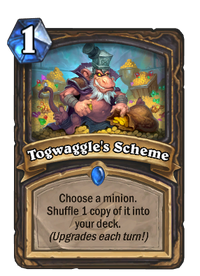 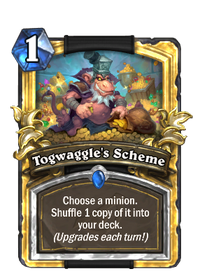 Choose a minion. Shuffle 1 copy of it into your deck. (Upgrades each turn!)
Flavor text

"Many minions equals many treasures for king. Kobold arithmetic!"

Togwaggle's Scheme is a rare rogue spell card, from the Rise of Shadows set.

Togwaggle's Scheme can be obtained through Rise of Shadows card packs, or through crafting.

This card is best used to stuff your deck with minions that you benefit from having multiple copies of. One obvious example is Pogo-Hopper.

Keep in mind that you can also target minions your opponent controls, meaning that you can claim powerful off-class cards that you would normally not have access to. For instance, in a Miracle Rogue deck, gaining copies of an opponent's Archmage Antonidas could prove to be devastating.

Togwaggle's Scheme also pairs well with Heistbaron Togwaggle, specifically Wondrous Wand or Tolin's Goblet. It can let you cheaply shuffle multiple copies of a powerful minion to reduce to 0 or create mass copies of, including Malygos, Leeroy Jenkins, or Togwaggle himself.

Holding onto this card until the Deck is nearly empty can be done as an anti-milling strategy. This can be used with Marin the Fox to get lots of treasure, and also to clutter the enemy field and prevent them from outnumbering you with minions. Possibly even overdrawing since they can't play minions from hand, milling their deck.