Toad of the Wilds

From Hearthstone Wiki
Jump to: navigation, search
Toad of the Wilds
Regular 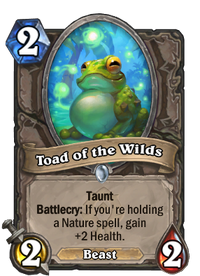 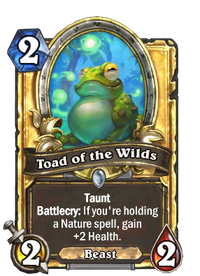 Taunt
Battlecry: If you're holding a Nature spell, gain +2 Health.

"Someday we'll find it. The Oasis Connection. The peons, the caravans, and me."

Toad of the Wilds is a common neutral minion card, from the Forged in the Barrens set.

Toad of the Wilds can be obtained through Forged in the Barrens card packs, through crafting, or as an Arena reward.

The nature of this minion's battlecry means that it can only be utilized to its full effect with classes that have easy Nature spells: Druid, Rogue, and Shaman. In particular, Toad of the Wilds goes well in Taunt Druid, allowing Razormane Battleguard to quickly pull it out to make a very strong and sticky early board. Mark of the Spikeshell further increases the Toad's stats, but unless the player has a second nature spell in hand, they won't be able to activate the second Toad's battlecry.