This article is using {{Card template}}.
See Help:Style guide/Card for how to edit this kind of article.
Edit this article
Timber Wolf
606 • DS1_175
Regular 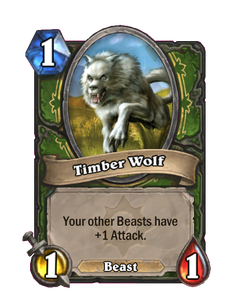 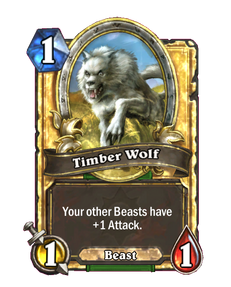 Other beasts totally dig hanging out with timber wolves. 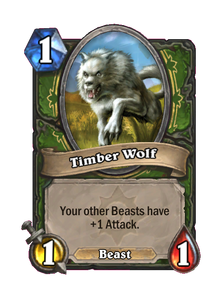 Timber Wolf is a hunter minion carsd, inducted into the Legacy set, formerly from the Basic set. 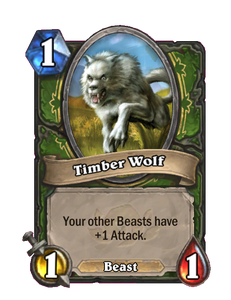 Regular and golden Timber Wolf are uncraftable and cannot be crafted or disenchanted.

Timber Wolf lacks presence by itself, but can be a powerful force when used in conjunction with other Beasts. It is most commonly played alongside Unleash the Hounds, granting all Hounds the extra punch they may need to kill enemy minions or simply deal more damage to the opponent.

Timber Wolf's low Health makes it a risky play unless the player can make immediate use of its effects. It is generally held in hand until other Beasts are ready to attack, at which point it is played to buff their Attack. This prevents it from being immediately removed, and means that even if the player removes it next turn, it will still have been of use. Timber Wolf is especially vulnerable against mages, and to a lesser extent rogues, demon hunters and druids, due to their hero powers.

A type of wolf native to Azeroth and Draenor, timber wolves are smaller, bulkier, and less vicious than worgs.

Common throughout Azeroth, timber wolves are pack hunters excelling in the persistent chase of their prey. While many humans fear timber wolves as servants of darkness and associate them with orcs, night elves embrace the rightful place timber wolves have in the natural order. Timber wolves move and hunt primarily at night.