This article is using {{Card template}}.
See Help:Style guide/Card for how to edit this kind of article.
Edit this article
Ticking Abomination
42782 • ICC_099
Regular 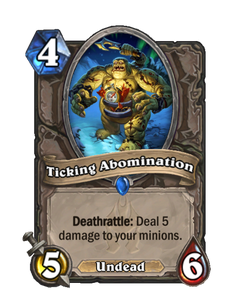 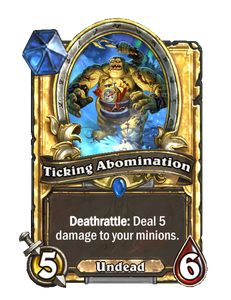 Abomination. Emphasis on the second syllable. 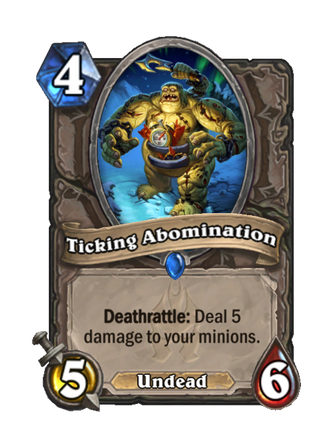 Ticking Abomination is a rare neutral minion card, from the Knights of the Frozen Throne set.

Ticking Abomination has a very strong statline for a 4-mana minion, but with a very large drawback. In nearly every situation, Ticking Abomination is simply not worth the price, as the Deathrattle prevents any other minions from being played, as they will almost definitely be killed with very little investment from the opposing player. Ticking Abomination's stats, despite being heavy for the cost, are still not high enough to consider running in decks that run very few minions, and most opponents will be able to ignore the card to stunt your future ability to develop.

A fringe combo is giving it to your opponent with

Treachery so that you can clear their side of the battlefield. However, this requires a heavy investment, especially if the Ticking Abomination is at full health, and there are better options for board clear for Warlock.

The one use this card does have is in

Coffin Crasher, the Coffin Crasher brings out Mecha'thun on death and two Ticking Abominations kills it (and very likely wiping out any other minions you have), triggering the combo in one turn.

Abominations are twisted, mutilated undead creatures comprised of multiple dead limbs and body parts from many different corpses. They are enormous warriors, scarred by loose stitchings and putrid, open sores. They love to carve flesh and tear their enemies apart. The slow-moving and dull-witted abominations constantly drip blood and smell like disease-ridden slaughterhouses. They carry large cleavers into combat and wield various sickle-bladed hooks on their disproportionate limbs.

The abominations were created by