This article is using {{Card template}}.
See Help:Style guide/Card for how to edit this kind of article.
Edit this article
Tickatus
61646 • DMF_118
Regular 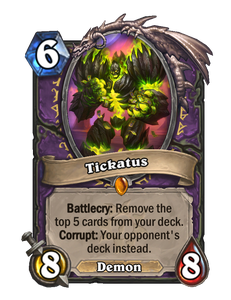 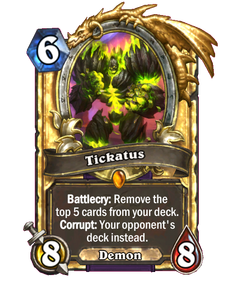 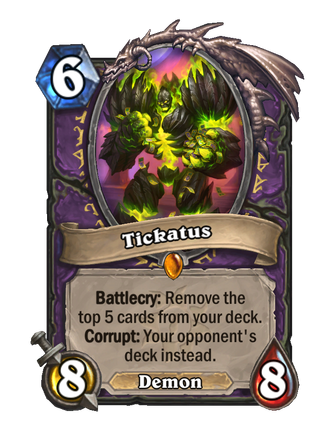 Tickatus is a legendary warlock minion card, from the Madness at the Darkmoon Faire set. 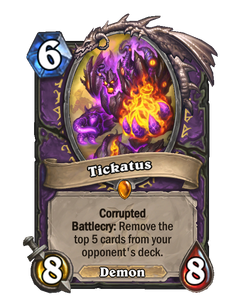 Tickatus is a bit of a double-edged sword. 8/8 for 6 mana is a fantastic bargain, but suffers from a terrible downside. You risk burning away crucial key cards from your deck by playing Tickatus uncorrupted. As such, it's best to only consider playing him immediately only if the enemy is considerably weakened. Tickatus's non-corrupted form can also be used to achieve the conditions of

Once Corrupted, Tickatus can be used as a counter card to combo decks, attempting to burn away key combo pieces in large numbers. He's also an almost automatic win in control matchups, where he brings the opponent closer to Fatigue and very likely burns their key value/removal cards that they need in order to deal with a control warlock value/boards. In Wild, Tickatus can also be used with

Brann Bronzebeard to burn up to 10 opponent cards, which is incredibly destructive against control/combo decks. Tickatus is generally too slow and unimpactful against an aggro deck, but can still be played as a large threat once the board has stabilized. Keep in mind that, with Warlock's consistent card draw, Tickatus will generally put both players on similar deck size (although with the opponent losing value on their burnt cards).

Tickatus is fairly expensive, and will require a heavy deck to consistently Corrupt. The easiest ways to Corrupt Tickatus are cards like

Twisting Nether, or even an uncorrupted

Strongman in a pinch.

Tickatus can also be duplicated by

Expired Merchant, or gaining another copy from

Y'Shaarj, the Defiler. This gives Tickatus the potential to burn a huge number of cards from the opponent's deck.

Tickatus is unique to Hearthstone. He appears to be an Abyssal, obsessed with Darkmoon Faire tickets; hence the name Tickatus.