This article is using {{Card template}}.
See Help:Style guide/Card for how to edit this kind of article.
Edit this article
Thunder Bluff Valiant
2615 • AT_049
Regular 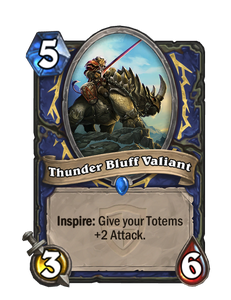 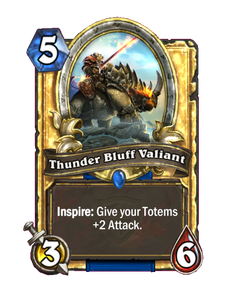 Allowing totems to attack is not cheating. I mean, there isn't anything in the rule books about it. 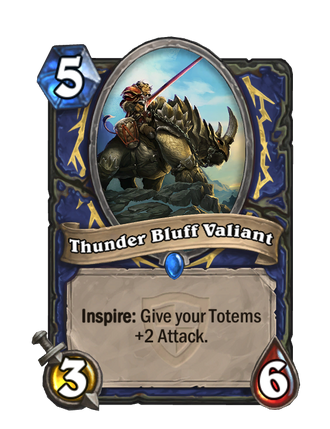 A strong minion with a very powerful Inspire effect; your Hero Power

Totemic Call will essentially summon a 2/2 or 3/1 minion every turn, and if any totems manage to stick on the board they can receive further bonuses. In addition, totems played directly or via other means such as

Totem Golem will also benefit from the Inspire.

The Thunder Bluff Valiant can be a late-game win condition by itself because of the minion presence it can generate if unanswered. It also makes for a fine mid-game play due to its sturdy body.

As well as having synergy with most Hero Power-enabling effects (

Maiden of the Lake,

This minion is a Valiant representing Thunder Bluff, the capital of the tauren.

Thunder Bluff is the tauren capital city located in the northern part of the region of Mulgore on the continent of Kalimdor. The entire city is built on bluffs several hundred feet above the surrounding landscape, and is accessible by elevators on the southwestern and northeastern sides. Established by the wise chieftain

Cairne Bloodhoof and his stalwart tribe, Thunder Bluff overlooks the verdant land of Mulgore from atop a series of windswept mesas. Prior to the construction of the capital, the tauren had lived as nomads for countless generations, often under attack by marauding bands of centaur. With Thunder Bluff’s founding, however, the proud and good-spirited race was finally granted a permanent home.