This article is using {{Card template}}.
See Help:Style guide/Card for how to edit this kind of article.
Edit this article
Thrall, Deathseer
42987 • ICC_481
Regular 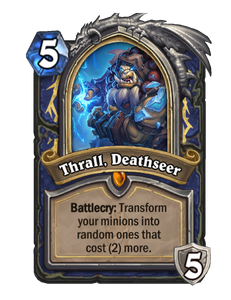 "Do not be afraid. Approach. The dead will sleep… for now." 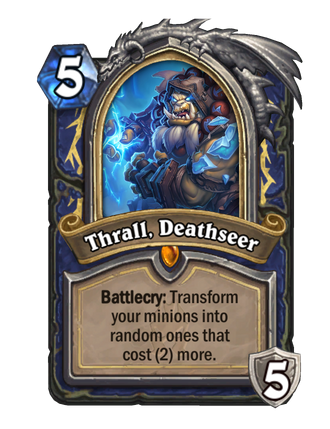 Thrall, Deathseer is a legendary shaman hero card, from the Knights of the Frozen Throne set. 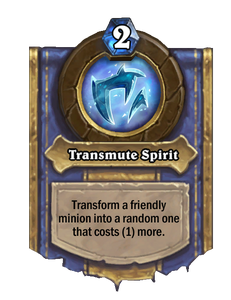 Even at his relatively low cost of 5 Mana, Thrall, Deathseer has very strong potency. He's best used in an

Evolve deck, synergizing with cards such as

The results of Thrall's Battlecry can be extremely random; while sometimes you may hit the jackpot with minions such as

The Lich King and

Millhouse Manastorm, other times you may be stuck with useless high mana minions such as

C'Thun. However, his Hero Power,

Transmute Spirit, can help offset this by transforming your minions that aren't worth what they should be at their Mana cost. Transmute Spirit, in addition to possibly upgrading a minion into one much more powerful, is a form of healing as the new minion is at full health. As such, it's wise to attack with a minion to reduce it to near-death, then Transmute it to bring it back to full health and possibly transform it into something much stronger. Just keep in mind that there's always the odds of having your minion transform into something lousy, so be prepared for that eventuality.

When used by a Shaman, Thrall loses his ability to summon Totems. Decks that are heavily based around Totems and decks that don't have a high minion count should steer clear of Thrall, Deathseer. For all other decks, Thrall, Deathseer is an excellent addition to help you maintain control of the board.

Thrall, Deathseer is the death knight version of

In the web comic Undeath Conquers All, a

Pompous Thespian tells a tale of how Arthas Menethil and

Jaina Proudmoore were corrupted into death knights of the Scourge and waged war against the living, causing the world to cry out for heroes to stand against them. Thrall answered the elements' call and began the long and perilous journey to Icecrown, while, across the sea,

Uther Lightbringer tracked down his former student. Arthas and Jaina easily defeated Uther, but some time later they returned to the Frozen Throne, only to be ambushed by the now undead Uther, who yelled for them to die. He was interrupted by Thrall, who urged Arthas and Jaina to surrender and return to being the heroes they once were. However, he was swiftly silenced by a blast of magic which transformed him into a death knight as well. The now undead Thrall stated "As I was saying... surrender, or the elements will destroy you. Let us begin." The Pompous Thespian's story ends with a massive battle between the undead Jaina, Uther, and Thrall, with the moral of the story being that the Frozen Throne does not bring people together, but rather pits them against one another until only the strongest remains. After being offered more gold by the audience, the thespian reluctantly concedes that Jaina won.