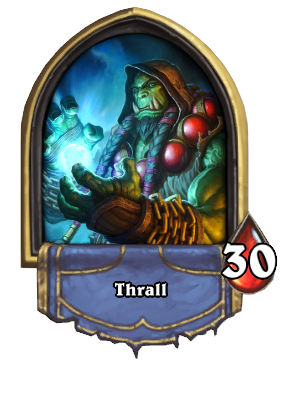 From his humble beginnings as a slave to his rise as Warchief of the Horde, Thrall has cut a path through the history of Azeroth through his courageous actions, unfaltering will, and his mastery of the Elements as a Shaman.

Thrall has been one of the most influential characters in the Warcraft universe; his intelligence, wisdom, and rationality has helped shaped the Horde into a unified force to be reckoned with.

Thrall founded the lands of Durotar and its capital city, Orgrimmar, as a sanctuary for orcs who pledged their loyalty to the Horde. Through his wisdom, Thrall has brought different races and backgrounds together under a banner of honor and strength, combining their might to give them hope for the future.

Tested time and again, Thrall has led his people through many pivotal points in Azeroth’s history, including the freeing of the orcs and their journey to Kalimdor, the Burning Legion’s attack on Mount Hyjal, and the fall of the Lich King.

After the Shattering of Azeroth that heralded Deathwing’s return, Thrall took the noble and courageous path to bring peace to the raging Elements, endangering himself to save the lands and people he holds dear. Thrall entered the chaotic Maelstrom to stabilize the rift between the Elemental Plane and Azeroth.

Thrall, alongside the dragon aspects Alexstrasza, Ysera, Nozdormu, and Kalecgos, led the army that defeated Deathwing and prevented the final Cataclysm that would bring about the end of Azeroth.

Before the razing of Azeroth from the Black Dragon, Deathwing, Thrall made the decision to appoint Garrosh as Warchief of the Horde. This brought about a sudden shift to the Horde as a whole, and Garrosh’s rash leadership only served to break the carefully forged alliances that Thrall worked so tirelessly to build over the years. Thrall’s quest to end injustice and tyranny was seemingly never-ending, as someone he once considered an ally and worthy of leading took the Horde into a brutal, war-mongering direction within the normally peaceful lands of Pandaria and beyond. Nevertheless, Thrall is determined to overcome all obstacles and bring peace to his people and all allies to the Horde’s cause.

Thrall is rarely without Doomhammer, a stout and imposing weapon that embodies the strength of the orcish people. Despite its intimidating name, Thrall brings hope to the orcish people when he wields it in battle.

"Thrall" was the moniker bestowed on the young orc Go'el in his first home--an internment camp created to keep the orc prisoners of the Second War from ever threatening Azeroth again--and the name could not be less fitting. When Go'el escaped his prison, he traveled in search of not just aimless freedom but his roots, eventually finding wisdom in the shamanic beliefs of his ancestors.

Thrall's shamanism guided his actions as he re-formed the Horde, becoming its warchief and leading his people to settle in an arid land that he called Durotar, in honor of his father, Durotan. Thrall led the Horde through a seemingly unceasing series of trials: the lifting of the demonic blood-curse that had tainted the orcs, a Burning Legion attack on Mount Hyjal, and the fall of the dreaded Lich King. When Deathwing returned and shattered the world, Thrall stepped down from his role as the Horde's warchief, instead joining the Earthen Ring, a powerful shamanic group, in an attempt to put the elements to rest and stop the Destroyer. Thrall chose Garrosh Hellscream as his successor, and that decision continues to haunt him as the ruthlessness of the new warchief brings the Horde to the point of insurrection.[1]

Raised by humans as a gladiator, Thrall later escaped from Durnholde, and fought under Orgrim Doomhammer, the name sake of the Horde capital, Orgrimmar, to liberate the orcs interned after the Second War. During the liberation of the last of the camps, Orgrim fell in combat bestowing his black plate, the title of Warchief, and the Doomhammer upon Thrall. Thrall then gathered his Horde and sailed to Kalimdor, and settled Durotar, the new home for the orcs. After joining the Earthen Ring shamans to help repair the elements of the world from the Shattering, Thrall, with the help of the dragon aspects and a group of mortal heroes, used the Dragon Soul to destroy Deathwing, and save Azeroth from destruction.

Thrall was born as the son of Durotan, whom Durotar is named after, and Draka. According to the World of Warcraft novels, Thrall was found as an infant in close proximity to the slaughtered corpses of his parents by Aedelas Blackmoore. Blackmoore then named him "Thrall", which in human tongue is another word for "slave". Blackmoore then took Thrall to Durnholde Keep, raising him as a gladiator. Thrall had both the intelligence of a human, and the ferocity and savagery of an orc. Thrall grew to befriend Taretha Foxton, a human woman who can be seen in World of Warcraft at the Caverns of Time instance Escape From Durnholde Keep, in which the player aids Thrall in his escape from Durnholde. Taretha later allowed for Thrall to escape by creating a diversion with fire. Thrall was then taken to an internment camp, where he met fellow members of the Horde, and learned of the corruption of Gul'dan, an orcish warlock. Thrall, with the help of Grom Hellscream, father to Garrosh Hellscream, later created a Horde army, which he used to return to Durnholde and confront Blackmoore, only to have Taretha's severed head thrown at his feet.

As well as his close friendships with Rexxar and the troll leader Vol'jin, Thrall was also a great friend of Cairne Bloodhoof, before his demise at the hands of Garrosh.

"My parents... murdered before I could know them! Betrayed… Gul'dan! If I must burn my way across the afterlife, I will find you in whatever hell you have hidden. I will have my revenge! Do you hear me?" - Thrall

When viewed in the Collection, Thrall has the following flavor text:

Thrall quit his former job as Warchief to save the world and spend more time with his family.