This article is using {{Card template}}.
See Help:Style guide/Card for how to edit this kind of article.
Edit this article
Thoughtsteal
30 • EX1_339
Regular 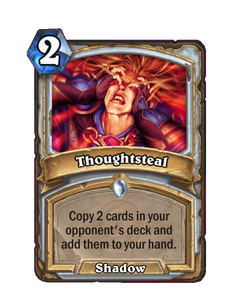 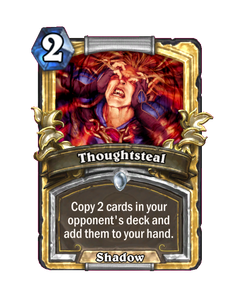 Dimensions: Full • 330 x 410px
Copy 2 cards in your opponent's deck and add them to your hand.
Flavor text

"What do you get when you cast Thoughtsteal on an Orc? Nothing!" - Tauren joke 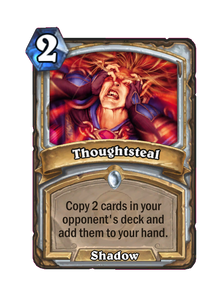 Thoughtsteal is a common priest spell card, inducted into the Legacy set, formerly from the Classic set. 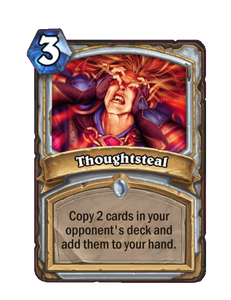 Thoughtsteal is unusual in that it allows you to draw cards from your opponent's deck. This can be useful strategically; the cards drawn can be used to deduce the style and content of the deck, and any card which is drawn by the priest is shown to currently be in their opponent's deck and not in their hand. On the other hand, this card gives you randomly selected cards from another player and class's deck. This can result in drawing cards that have little synergy with your own deck, or even little or no actual use, such as drawing Deadly Poison (unless you also steal a weapon card). However, playing Thoughtsteal does result in a net gain of one card, making it relatively efficient.

If a priest uses Thoughtsteal against you, you can use knowledge of the cards remaining in your own deck to deduce which cards they may have drawn.

One reason to include Thoughtsteal in a deck is simply to enjoy the unpredictable variety of drawing cards from another class mid-game. This can add an enjoyable element of RNG to the game, and defeating a player using their own stolen cards can be particularly entertaining.

If you use a golden Thoughtsteal, the cards you copy will become golden even if they are plain in your opponent's deck. This has no benefit to you when using them, other than aesthetic appeal. However, if you use a non-golden Thoughtsteal, the "goldenness" of the copied cards will follow the "goldenness" of the original cards. This may give you a tiny advantage. For example, if you copied a golden Lava Burst, then witness your opponent playing a non-golden one, they must be running 2 copies of that card in his deck, one golden and one plain. For this reason, top players do not mix golden/plain copies of any card in their decks; they either run both copies golden, or both plain. In this case, plain Thoughtsteals ofter a genuine (if slight) strategic advantage over golden ones.

While Thoughtsteal does not appear in Warcraft lore, it is similar to the Spellsteal mage spell from World of Warcraft in that it allows you to 'steal' spells from your opponent and use them as your own.