This article is using {{Card template}}.
See Help:Style guide/Card for how to edit this kind of article.
Edit this article
Thistle Tea
38395 • OG_073
Regular 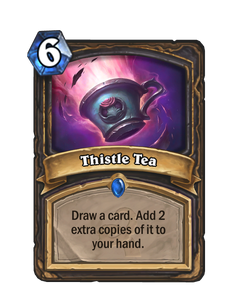 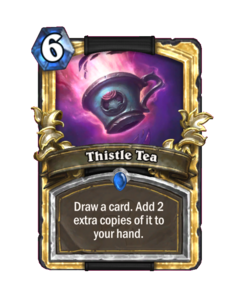 Aren't Thistles prickly? Why would you drink them? I don't get Rogues. 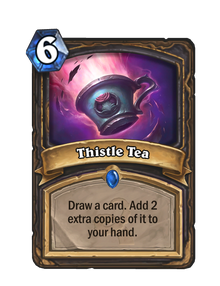 Thistle Tea is a rare rogue spell card, from the Whispers of the Old Gods set.

While providing card draw and potential duplication of useful cards, this Spell's prohibitive cost of 6 mana means that you're unlikely to make use of whatever card you drew even during the midgame - unless this Spell is preceded by Preparation.

This Spell contributes well to a deck centered around The Caverns Below, as it guarantees three copies of the same minion (assuming you draw a minion) that can contribute to quest completion, although it's worth noting that many existing builds for the deck often heavily rely on more efficient card draw and Return to hand effects, often achieving the quest requirements before this Spell is even playable. On the other hand, the archetype's reliance on cheap minions means that this Spell can help duplicate 5/5 attackers for easy swarming.

Thistle Tea is a drink that instantly restores the energy of a rogue. Designed for use at low levels, the tea has no effect at current level caps, making it useful mostly for levelling. Thistle Tea can be made by cooks who have learned the right recipe, and is also a reward from certain quests.