This article is using {{Card template}}.
See Help:Style guide/Card for how to edit this kind of article.
Edit this article
Thing from Below
38267 • OG_028
Regular 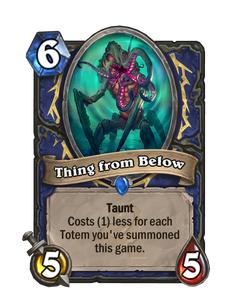 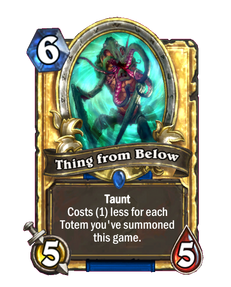 Just can't resist the opportunity to hang around with a bunch of totems. 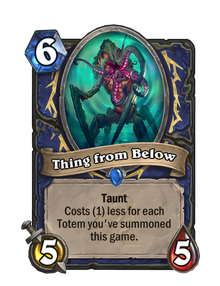 For the event version of this card, see Thing from Below (Event).

Thing from Below is a rare shaman minion card, from the Whispers of the Old Gods set.

Example: A Thing from Below generated by Unstable Portal takes into account prior Totem summons (if any) and immediately has its cost reduced.[3]
Example: Returning a Thing from Below to the hand will cause its cost to immediately be reduced by the number of Totems the player has summoned that game (including those summoned while it was in the battlefield).[4]

Thing from Below is a powerful card in Totem-based decks, but even in almost any other Shaman deck it's still powerful; with the mana cost reduction it is often possible to play Thing from Below for near to zero mana. The sturdy body and its Taunt effect can create a massive tempo swing in the Shaman's favor.

Because this card synergizes with all friendly Totem-summoning, not only the use of Totemic Call, it can even be used with cards that replace hero powers while still gaining a good discount. Thing from Below is very powerful in Even Shaman decks, which speeds up its cost reduction thanks to the reduced hero power cost.

It can also be used in Evolve Shaman decks to create a 7-mana minion, while still being useful on its own if you don't have anything to transform it with.

While the term "thing from below" would fit quite well for most of the creations of the Old Gods, the origins of this particular creature are unknown.