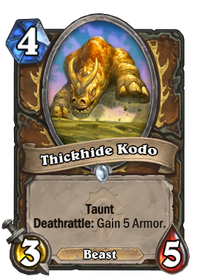 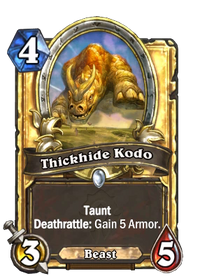 The introduction of professions was devastating for kodo populations.

Thickhide Kodo is a common druid minion card, from the Forged in the Barrens set.

Thickhide Kodo can be obtained through Forged in the Barrens card packs, through crafting, or as an Arena reward.

Thickhide Kodo is a simple but highly effective defensive minion. Taunt gives it synergy with a few other cards in the same set (such as Razormane Battleguard and Plaguemaw the Rotting), and its Beast tag makes it a viable target for Menagerie Warden and Shan'do Wildclaw's copy effects.

Druid has some cards that benefit from this minion's armor gain, but these are primarily Wild-only. Its Deathrattle trigger can upgrade a Jasper Spellstone, and paired with Oaken Summons it will fully upgrade Spellstones in your hand. It can also be revived by N'Zoth, the Corruptor, Hadronox, and N'Zoth, God of the Deep.