"Beyond the Void's event horizon, all your minions become crushed into a single powerful entity of light. Build a deck and sacrifice your minions to The Void!"

The Void Singularity is a Tavern Brawl. It debuted on November 29, 2017. For exact times, see the schedule.

Additionally, The Void Singularity was one of nine Tavern Brawls featured as part of the 207th Brawl, The 207th Brawl Spetacular!.

This Brawl sees players doing battle using custom decks using any class. At the end of a player's turn, all of their minions are destroyed (triggering any Deathrattle effects in the process) and the minions' stats combined into a Void Singularity minion with the combined Attack, Health, and mana cost (up to 10 mana) of the destroyed minions. If a player only has a Void Singularity on their side of the board at the end of their turn, nothing happens. The goal of the Brawl is for the player to overpower their opponent by creating as powerful of a Void Singularity as possible, while also preventing their opponent from doing the same. 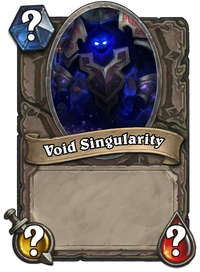 The goal of this Tavern Brawl is to create the biggest Void Singularity to overpower the opponent's. The best way to create a big Singularity is to play overstatted minions. Persistent or triggered card effects are useless in this Brawl, so only Battlecry and Deathrattle minion effects will have any impact.

Cards like Ancient Watcher, Humongous Razorleaf, Bittertide Hydra, and Keening Banshee are powerful cards for this Tavern Brawl, since their downsides are rendered irrelevant. Living Mana is also very powerful, generating up to 14/14 worth of stats, and since they get destroyed instantly, all your mana will be refunded instantly as well.

Hard removal is also extremely powerful for dealing with the opponent's Void Singularity. As the game goes on, it becomes impractical to destroy one via damage. Sap also works well because a 10-mana Void Singularity will be clunky to resummon.

Priests have the most tool to be successful in this Tavern Brawl. They have access to many single-target hard removal, can buff their own Void Singularity, can finish their opponent with a Divine Spirit/Inner Fire combo, and even revive a huge Void Singularity with Eternal Servitude. Hunters are also a solid choice for this brawl, having access to many Deathrattle minions that summon more minions and can keep the enemy Void Singularity in check with Hunter's Mark or Freezing Trap.

The Void (also referred to as Shadow) and the Light are the most fundamental forces in existence. Although contradictory by their very nature, they are bound together on a cosmic scale. One cannot exist without the other. Pure Light and Shadow dwell in realms outside the borders of reality. The Void is not necessarily "evil", it is a primal force with its morality characterized by how it is wielded. Dimensius the All-Devouring opened gateways to the Void and the Twisting Nether when he invaded K'aresh. However, shades of their presence are found in the physical universe: Light manifests as holy magic, while the Void appears as shadow magic.

The Void can be a source of terrible power, the kind of power that comes at a price. While the Light is often said to bring about feelings of positive emotion—hope, courage, comfort—and the like, Shadow abilities are the opposite, able to impart feelings like despair, doubt, and panic. In a poetic sense, it can be said that the emotions which the Light brings about come from the "heart", whereas the emotions manipulated by Shadow are often based on survival logic, and therefore affect the "mind".

The Void shows only half truths. It cannot fully see destiny, though neither can the Light, because neither are singularly responsible for creation. The Void seeks every possible path and sees them all as truth.

The concept of the Void having an event horizon and a singularity is unique to Hearthstone and appears to be inspired by the real world's black holes.