This article is using {{Card template}}.
See Help:Style guide/Card for how to edit this kind of article.
Edit this article
The Skeleton Knight
2681 • AT_128
Regular 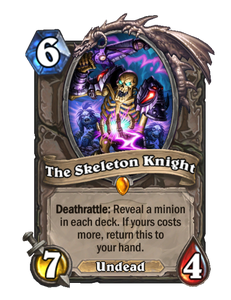 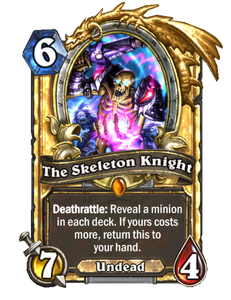 Dimensions: Full • 330 x 410px
Elite
Deathrattle: Reveal a minion in each deck. If yours costs more, return this to your hand.
Flavor text

Apparently it really was just a flesh wound. 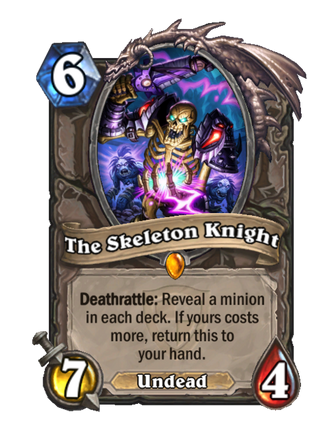 The Skeleton Knight is a legendary neutral minion card, from the Grand Tournament set.

Most likely only good in very heavy control decks due to the Joust effect and the card advantage the effect generates.

This spooky skeleton is a skilled knight who has spent his whole un-life practicing the joust! The Skeleton Knight loves the contest so much that when you win a joust, he’ll return for yet another chance at the fray. He also enjoys canned meat and pasta.[4]

"The Lich King is cunning and will use treachery to thwart his enemies. To that end, he has dispatched the Black Knight to eliminate promising candidates from Highlord

Tirion Fordring's army. The undead's mere presence defiles the Crusaders' Coliseum, and those who prevail against him will prove their worthiness."

The Skeleton Knight is the second form of

The Black Knight. In World of Warcraft, he starts off with rotting flesh and loses it, becoming The Skeleton Knight. He also raises the dead in this form.