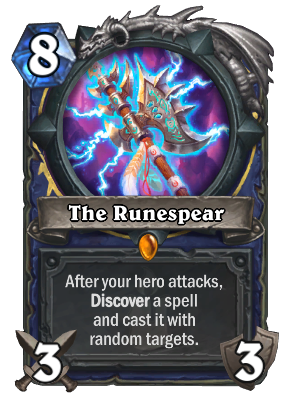 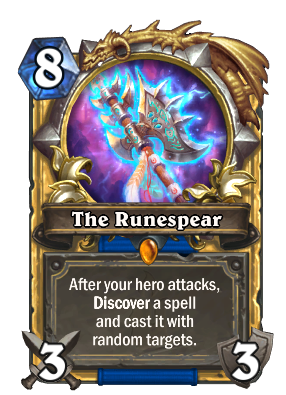 After your hero attacks, Discover a spell and cast it with random targets.
Flavor text

When asked what the runes do, the tauren smith smiled: "A little of this, a little of that..."

For the boss card in Book of Heroes, see The Runespear (boss).

The Runespear is a legendary shaman weapon card, from the Kobolds and Catacombs set.

The Runespear can be obtained through Kobolds & Catacombs card packs, or through crafting.

While this weapon has an extremely high mana cost with subpar stats to match it, it can potentially pay for itself with the spells it can play. Emphasis on "potentially".

While the spells you can play aren't completely random and targeting will not frequently be an issue since not many Shaman spells are targeted, Shamans have extreme variance to their spells. Some spells are better when ahead on board like The Storm Bringer or better while behind like Volcano and there's a chance to get niche or useless spells like Eureka! or Totemic Might. There is also Overload cost to consider since the discovered spells can Overload your mana crystals.

The Runespear is overall a very unreliable weapon for its high variance and poor stats, but it can create big saves if you're lucky enough.

The legendary Bloodhoof Runespear was the pride of the Bloodhoof tribe, and had been passed down by the tribe's chieftains to their heirs for twenty generations. Every Bloodhoof chieftain during that time had wielded it in battle, the runespear always striking straight and true and had tasted the blood of many noble enemies. As tradition, every chieftain carved their story, in runes, into the shaft. Cairne being older, he had the opportunity to carve most of his own story into the shaft. He had planned to finish his story, but he would not get the chance to do so. The runespear would have become part of the inheritance of Cairne's son and heir, Baine Bloodhoof.

All of Cairne's weapons were blessed by a shaman, including the Bloodhoof Runespear. This allowed the runespear to strike and harm incorporeal spirits as if they were any solid opponent.

Upon challenging acting Warchief Garrosh Hellscream to a mak'gora - a duel to the death - Cairne wielded the Bloodhoof Runespear, facing Garrosh's Gorehowl. During the combat, Garrosh shattered the Runespear and proceeded to inflict a mortal wound (though it did not seem so to any observer); as a result Cairne was killed shortly thereafter. Jevan "Stormsong" Grimtotem managed to secretly secure a fragment of the shaft as proof of his words of the High Chieftain's death to Baine, to whom he handed over the fragment. The other remnants of Cairne's Runespear were gathered and later placed on his funeral pyre afterwards, except for a fragment that was claimed by Thrall as a memory of his old friend; the rune carved into the fragment was the rune for "healing", a meaning that did not escape Thrall. Whether Baine kept the fragment given to him by Stormsong is currently unknown.